Meteorain is performed by Cloud rotating his sword in the air, at which point six meteorites will fall on enemies.

Meteorain is obtained by killing 200 enemies as Cloud after he has obtained Blade Beam. A quick way to kill 200 enemies is the dead end in Mythril Mine, immediately northeast of its west entrance, where there are approximately 4.2 enemies per encounter. These enemies have low stats and are easy to defeat with any attack. Cloud can pair Magic Materia with All, or use Matra Magic, a summon, or Slash-All, to defeat the enemies quickly. 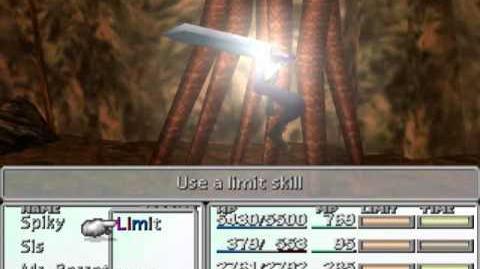 Meteorain performs six hits to random enemies at 1.625 Cloud's normal physical damage each (combined, this deals 9.75 times Cloud's normal damage). Against waves of enemies, it can be unreliable, but against single targets, all six hits are guaranteed to hit the same target. This makes Meteorain Cloud's strongest ability against bosses until obtaining Omnislash.

After using Meteorain six times, Cloud will obtain Finishing Touch, which has a chance to instantly kill enemies not immune to Instant Death, and deals 3.125 times Cloud's normal damage to all enemies who are immune to it. Although Meteorain is still best against bosses and single targets, Finishing Touch becomes more reliable against groups of enemies.