Meteorain (メテオレイン, Meteorein?, lit. Meteor Rain), also known as Meteor Rain, is a recurring ability, usually a special attack associated with Cloud Strife. It involves the user summoning a barrage of meteorites from above to attack enemies.

Meteorain is one of Cloud's Level 3 Limit Breaks. Cloud leaps into the air and sends six meteorites at opponents, doing 1.625 times normal damage to each of them. Cloud must defeat around 320 enemies to learn it, a number much higher than what the other characters require to learn their Level 3 Limits.

This section about an ability in Final Fantasy VII G-Bike is empty or needs to be expanded. You can help the Final Fantasy Wiki by expanding it.

Meteorain is an enemy ability used by King Thordan during the final fight with him inside the The Singularity Reactor. He will drop meteorites on a specific area dealing damage to all those caught within the impacting zone.

A limit skill that inflicts damage by summoning a meteor out of the sky.

Meteorain is one of the abilities used by Cloud. It summons a single meteorite to attack an enemy. Its range and effect are 3, its speed is 10, and it requires 560 JP to master. Cloud needs his Materia Blade to perform this action.

Meteorain is one of Cloud's HP attacks. It is learned at Level 38 and requires 40 CP to equip and 300 AP to master. Cloud remains on the ground sending the meteors up into the air before causing them to rain on the opponent.

Meteorain is an HP Attack for Cloud. It follows a path from where Cloud summoned Meteorain.

Meteorain is Cloud's EX Ability, obtainable from equipping his Force Stealer EX Weapon, or from leveling the weapon to Level 35 and acquiring the Meteor Power Affinity Ability as a Passive Ability.

Meteorain is a 6-hit group ranged BRV attack + HP attack, where the attacks are distributed evenly between enemies, depending on how many there are at the time of the ability's use.

Meteorain is the ability that is used by Cloud during battle.

Meteor Rain is Cloud's dark-elemental Sync Soul Break. It deals fifteen hits of powerful dark and non-elemental ranged physical damage to a single enemy. It also grants Cloud to have access to multiple temporary effects after its use; use of the Hazardous Darkness and Climbing Charge Sync abilities, damage cap break for his dark and heavy-type abilities, and Empowered Dark Infusion.

The Soul Break is learned from the Laevateinn (VII), and also grants a mastery bonus of 10 points to Cloud's Attack stat. Like other Sync Soul Breaks, it can be honed with scrolls traded with Anima Lenses.

One of Cloud's cards, depicting his Dissidia artwork, has Meteorain as an ability. Meteorain costs two Light CP, the discard of a second Cloud card from the hand, and Dulling Cloud, and deals 4000 damage to all Forwards under the opponent's control.

Meteorain is Cloud's Special ability, used by holding the Special button. Cloud will leap up in the air and swing his sword to shoot three meteors at the opponent, much like the animation in Final Fantasy VII. Sephiroth can use an identical attack used in the same way, but instead shoots five meteors, the attack is called Black Materia. Zack also uses an identical attack to Cloud's, instead named Meteo Shots.

In Kingdom Hearts Re:coded, Sora uses Meteor Rain as a finish command. It conjures several meteorites that fire forward at a downward angle. 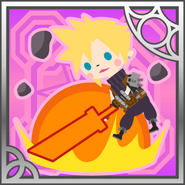 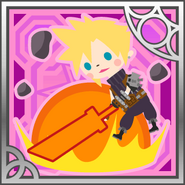 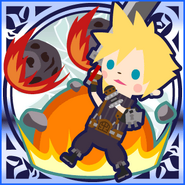 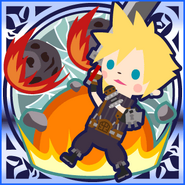