Meteor is the most powerful offensive spell in the world of Final Fantasy VII. Referred to as "The Ultimate Destructive Magic", this incarnation of Meteor is probably the most powerful seen in the series. While in other games the spell brings either micrometeorites to the planet, or else lifts the target into space to collide with a passing meteor storm, in Final Fantasy VII Meteor summons a celestial body to harm the planet itself. It is unknown if, like Omega and Holy, Meteor has an actual purpose set by the planet. 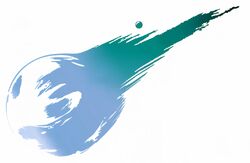 The Cetra were given the power of Meteor in the ancient times, but because they valued life they shunned it and locked its source away in a cryptic puzzle. Sephiroth learns of Meteor while traveling the lifestream and hopes to use it to injure the planet so it would gather its lifestream and he could absorb the planet's life force and become a "god".

In the Final Fantasy VII Remake, Sephiroth follows and taunts Cloud and his party, showing them a vision of Meteor being summoned upon Midgar in the Shinra Building VR theater, and later the Whispers conjure visions of what the future should be, including one of the approaching Meteor. During the party's battle against Sephiroth in a surreal landscape, he summons a colossal ball of fire from the sky.

Sephiroth uses Cloud Strife and his party to take the Black Materia out of the Temple of the Ancients, and an avatar of Sephiroth, Jenova, shape-shifts into his form and takes it from Cloud afterward. Pursuing Sephiroth and Jenova to the North Crater, Cloud and his allies kill Jenova∙DEATH and reclaim the Black Materia. Sephiroth takes control of Cloud's mind and forces him to deliver the materia to him and immediately uses it. The planet summons its guardians, the Weapons, and the world flies into a panic.

Shinra Electric Power Company and the party both attempt to find a way to stop Meteor. Shinra loads Huge Materia into the abandoned Shinra No. 26 rocket at Rocket Town and launches it at Meteor, and although the explosion fragments Meteor's surface, it is not destroyed. The party discovers that Aerith Gainsborough had cast Holy, the Ultimate White Magic, which could stop Meteor, but Sephiroth is blocking it. The party's goals thus turn to defeating Sephiroth and freeing Holy.

And then, it came -- the chosen day. In the end, the planet itself had to make the battles stop for good. The planet used the Lifestream as a weapon, and when it burst out of the earth ... all the fighting, all the grief and sadness ... everything was washed away.

Cloud and his party descend into the Northern Cave and kill Sephiroth, freeing Holy. However, it is too late, and Meteor is already impacting over Midgar. Holy fights off Meteor, but due to the gravity near it, it is too unfocused to destroy it. The lifestream erupts from the ground, controlled by Aerith, and pushes Meteor back, allowing Holy to destroy it and save the planet and what's left of Midgar.

The opening of Dirge of Cerberus expands on the events during Meteorfall. Yuffie Kisaragi oversaw Midgar's evacuation along with Vincent Valentine who climbed to the Sister Ray controls to investigate Professor Hojo's spirit, and was saved by Yuffie as the tower collapsed. Rufus Shinra, initially presumed for dead in the ruins of the Shinra Building, was also being loaded into a helicopter.

In the novella On the Way to a Smile it is revealed that Reeve Tuesti ordered the Midgar citizens to move under the plate to avoid casualties, but that the lifestream's emergence to fight Meteor caused as much damage to Midgar as the Meteor itself.

In the aftermath of Meteor's destruction, the world struggles to rebuild. mako reactors are shut down as people feel indebted to the lifestream for saving them and refuse to use mako. Fossil fuels are used, with limited success, as alternatives.

The Midgar survivors move north and build a new city, Edge, on the outskirts of the Midgar ruins. Over time Edge expands as more people move from Midgar to the new city, including Denzel. A monument in the city center is donated by Rufus, depicting Meteor's impact over Midgar.

The lifestream that emerged to fight Meteor was partially contaminated with Sephiroth's influence, more specifically, Jenova's cells. Those who came in contact with the tainted lifestream contracted Geostigma, an incurable and fatal disease. The epidemic culminates two years later in Final Fantasy VII: Advent Children where, due in part to Geostigma, Sephiroth is revived.

When the Midgar stage transitions Meteor begins to fall.

Sephiroth's debut trailer indirectly alludes to Meteor and in particular his summoning of it in his home game due to it featuring Sephiroth turning to watch a descending object at one point in the trailer.

The Meteor is the logo for Final Fantasy VII. The green and blue of the logo set the theme for the color tone for the rest of the game as well, reflected in the mako energy and lifestream that play crucial roles in the story. Logo illustrator Yoshitaka Amano has described creating the Final Fantasy VII logo as a challenge. He drew many variations and concepts around the Meteor motif, and in the end wasn't sure if it was good and thus let the developers choose the final version.[1]

The logo for Final Fantasy VII Remake shows the same Meteor from the original game, but now in a 3-D perspective, and a darker green color. Director Tetsuya Nomura had wanted to use the logo from the game for the E3 2015 reveal trailer, but the remake logo hadn't been completed yet. Nomura wanted to match the atmosphere and had the idea to make it metallic, and the trailer staff made the logo as per Nomura's wishes. That logo ended up being used in the final game. The logo in the E3 2015 trailer doesn't have "Final Fantasy", just the Meteor and the word "REMAKE". This was because Nomura had always wanted to just have the Meteor logo. Back before the original came out the advertising producer at the time had suggested using just the logo for the game case, rationalizing that even without the title, everyone would know it was Final Fantasy VII, and ever since Nomura had wanted to do it.[2]

In an earlier version of the scene where the party ponders the impending end of the world aboard the Highwind just before the final dungeon becomes accessible, the party said they had two or three days until Meteor's arrival and Sephiroth's awakening. In the final game, Red XIII says they have seven days, and no one mentions Sephiroth "awakening".[3]

The meteorite in the Starfall ability in the PS and GBA versions of Final Fantasy II appears to be the same model as the Final Fantasy VII world map model of the Meteor.

Meteor striking the planet as seen in a vision in Final Fantasy VII Remake.

Meteor striking the Shinra Building as seen in a vision in Final Fantasy VII Remake.

Meteor above Midgar in a flashback in Dirge of Cerberus -Final Fantasy VII-.