So be it! Let my life fuel the spell that ends his!

Meteor, also called Meteo, is a powerful spell in the Final Fantasy IV series. The ultimate Black Magic, it bombards the enemy with small meteorites and can do massive damage. It requires significant vitality and power to cast and can backlash and kill the caster if they are too weak to harness the spell.

The party learns of Meteor from Tellah. Wishing to avenge his daughter, Anna, he seeks Meteor to kill Golbez. Tellah is searching for Meteor on Mount Ordeals where he encounters Cecil Harvey. The young mages Palom and Porom warn Tellah Meteor is too dangerous in his old age, but he does not listen. At the summit, Kluya's spirit restores Tellah's memories, granting him all the spells he has forgotten, and teaching him Meteor. When the party returns to Mysidia, the Elder of Mysidia warns Tellah against using Meteor, and implies the spell had been sealed away for some time for being too dangerous, but Tellah still does not listen.

Some time later in the Tower of Zot, Tellah claims his chance at revenge. Assailing Golbez with the strongest spells he knows to no avail, Tellah casts Meteor. The spell weakens Golbez, forcing him to flee, and shatters his telepathic control of Kain Highwind. The spell may have also weakened Zemus's control over Golbez himself, causing Golbez to hesitate killing Cecil (due to realizing the latter was, in fact, his brother). The effort to cast Meteor drains what is left of Tellah's life force, and he perishes soon after.

After the final battle when the party is fleeing the Depths pursued by the Creator, the Maenads attack him to delay him and help the party escape, eventually destroying him with a Meteor spell.

Meteor has a casting time of 10 and costs 99 MP to cast. It is the most expensive spell, apart from the Twincast option Ultima in the 3D remakes. It ignores magic defense and split damage, as well as Shell and Reflect, making it the most powerful offensive spell with a base power of 800 in the 2D versions, and 250 otherwise. In the 3D remakes, Ultima is stronger. When Tellah acquires the spell, he only has 90 MP and cannot gain more normally. In some releases, a Soma Drop or Augments can be used to increase his maximum MP. It is learned by Rydia (level 60 (80 in 3D remakes)), Fusoya (default), and Palom (level 50 (55 in 3D remakes)).

Zeromus (2D and 3D) casts Meteor during the final battle when at critical health (as his first attack when below 30,000 HP and every third turn thereafter in the 3D remakes, and every other turn when below 12,000 HP in the other versions).

Rydia? routinely uses Meteor in the final battle with the party. It can be learned by Palom (level 50).

Meteor is learned by Rydia (level 65), Golbez (level 60), and Palom (level 50). It deals heavy non-elemental damage to all party members. 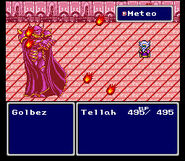