The young head of a pirate clan that patrols the seas around Olderion. She's not just a pretty face, boasting powerful axe-wielding strength and unshaken charisma that separates her from the rest of the ruffians. All this points to a past which, given the comparatively peaceful state of Olderion, is surrounded in mystery as to how and why she became a pirate.

Mercedes is a supporting character in Final Fantasy Brave Exvius. The captain of her own ship, which loiters in the waters of the Olderion continent, she is a pirate that befriends Rain's party during their journey to the Water Shrine.

Mercedes is a young woman with tanned skin and long light-brown hair. She wears a rather revealing outfit consisting of a black bikini and a blue fur coat that covers her back. She has a tattoo on her left leg, black bracers on her arms and short black shoes. She wields her signature weapon the Viking Axe, a massive weapon in one hand.

Although a Pirate, Mercedes is not really a cold-hearted villain. When confronted about her motives, she claims she followed piracy as a way to feed her crew who are her only family. When her life is spared she becomes loyally supportive to the party and abandons piracy altogether, showing she is a good person at heart.

Following the flooding of Aquapolis Olderion by Veritas of the Waters, Rain's party decides to track her down and then go to the Water Shrine to restore the Aquapolis back to normal with Dark Fina's abilities. However, when Lasswell muses that they won't be setting sail soon due to the city's state, Mercedes takes her chance and offers them her services for free–telling them her ship is going north, just where they are headed. Despite the suspicious offer, Rain accepts, and they soon set sail on Mercedes' ship.

Soon after setting out, Mercedes reveals her true colors and orders the party to hand over everything they have, telling them she will maroon them instead of throwing them off the side if they do. When they resist, Mercedes has her men attack the party, even joining them herself in the attack. When she is defeated, she expects Rain's party to dispose of her, but he simply tells Mercedes to take them to the north sea just as they had agreed. She warns them against going there, but takes them anyway in spite of the storm, allowing the party to confront Veritas' aboard her ghost ship.

As they reach Widow's Cape, Mercedes bandages Rain's arm–which, after the confrontation with Waters, had begun to emit a powerful glow to signal that his power had awakened. Rain then thanks her for being a big help, and Mercedes says she will help the party anytime they need it. She also claims she is done with piracy, but Rain doubts her claims; he suggests that she ferry people instead and leaves.

In the Memories from the Aquapolis event, it is revealed that during the party's trip, she asks Elle if being a Warden of the Waters as he is, is what makes him want to protect the Aquapolis. He answers that he just wants to protect his family and those he loves, and Mercedes apologizes for the personal question. Instead, he asks how she came to be a pirate. Mercedes then tells Elle that she grew in a rich household, "pampered within an inch of [her] life" but one day she lost everything but her ship, and instead of giving up, she decided to make a new life upon the seas.

In the main story Mercedes is last seen in Aquapolis Olderion during the finale of Season One. She prays beside Elle’s fiancé Arsha while Rain and his party battle the Chaotic Darkness overhead.

Mercedes plays a rather significant role in the Charlotte event story 'A World United'. When Grandshelt sends out a plea for assistance, Mercedes answers to pay her debt to Rain. Though initially badmouthed and mistaken for troublemakers, she and her crew promise to ward off the monsters surrounding the coast. She catches Charlotte off-guard with a personal question; asking which boy she had a thing for, Rain or Lasswell. Laughing, she explains that Charlotte’s expression gave it away.

Later she helps Charlotte bring down Dr. Lazarov's Chaotic Engine, calling herself the protector of the sea. Fronted by Zile, her canons clear a path through the hordes of monsters ashore, allowing Charlotte and her party to advance. After the battle, Shepard reports that all visiting powers have returned to their countries of origin. Though unknown, it is assumed Mercedes and her crew return to Olderion.

Mercedes appears as a optional playable character. Her unit is a 4-6★ Rare Summon that has been available since the event Memories from the Aquapolis. Being a Pirate, she focuses on dealing physical damage to her enemies, mostly of the Water element, and her choice of weapon is the axe (though she can also equip daggers, swords and hammers, along with hats, helms, clothes, light armor and accessories).

Mercedes appears as a boss during the main story, in the stage Pirate Ship - The Bold Lady Boss. 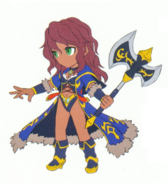 Mercedes is a feminine given name of Spanish origin. It is the plural of "mercy", from the Spanish title of the Virgin Mary, María de las Mercedes. It derives from the Latin word merces meaning "wages, reward", which in Vulgar Latin acquired the meaning "favor, pity".