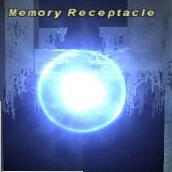 Receptacles appear to be glowing spheres of energy, bobbing up and down in a contained area in which they are held. Periodically, they exude memories in the forms of Strays, which guard the receptacle and assist it when under attack.