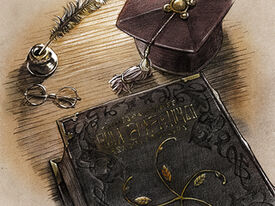 "Memoro de la Ŝtono" (lit. "Memory of the Stone") is a vocal section part of the Final Fantasy XI opening theme made famous by its performance during the Distant Worlds: Music from Final Fantasy and VOICES: Music from Final Fantasy concerts. It features a choral arrangement with lyrics sung in Esperanto, an artificial language invented in 1887 by L. L. Zamenhof (1859–1917), a Polish physician and philologist, intended for international use and still used by millions of speakers worldwide.

Both live performances were conducted by Arnie Roth and were played as a medley along with the song "Distant Worlds".

Now flows innocent blood
On Vana'diel, a vast land
The entire world trembles
In despair from the scourge

Prevented
By no fate
Stopped
By no strength

But through the stormy night
Behold: a star of glory shines!
Against a brutal outcry
Behold: a hymn springs forth!

A shining star, a ringing song:
A dream and a prayer for us!

"Memoro de la Ŝtono" is the third section in the opening theme to Final Fantasy XI, which fittingly plays during the game's opening cinematic. It was composed by Nobuo Uematsu.

"Despair" and "Repression" play during various cutscenes in Final Fantasy XI. "Third Ode: Memoro de la Ŝtono" plays when the Wyrmking reaffirms the pact he made with the Kuluu during the events of Chains of Promathia.

"Memoro de la Ŝtono" appears once again, but this time as a Battle Music Sequence. It keeps the same title as the one in Theatrhythm Final Fantasy.