Memoria... A place of memories.

Garland, as a disembodied voice explaining Memoria to Zidane.

Memoria is the penultimate dungeon in Final Fantasy IX. Memoria was conjured from the planet's memories. Garland guides Zidane through it and will explain the memories the party walks through. Memoria eventually takes the party to the Crystal World.

Glowing orbs allow the party to save, use a Tent, or switch party members (the only location in the game that doesn't use moogles for this purpose). There are also invisible save points. Memoria is a unique location as it allows Zidane to switch out of the party; however, he will still lead the party in the field.

A number of "phantoms" can be challenged to Tetra Master here who hold a number of rare cards between them.

Where Memoria comes from is unknown. It is unclear whether Kuja summoned it, or if it appears naturally after Terra's destruction, perhaps due to the enormous amounts of Mist that was expelled when the planet was destroyed. What is known, however, is that the Iifa Tree is preventing Gaian souls from returning to the crystal in the planet core.

The souls, upon returning to the crystal, bring with them the memories of the life lived and thus allow the crystal to grow. Memoria, at first, appears to be made out of the party's memories, but the deeper within the party travels, the further back in time they go, and discover that Memoria is made out of the collective memories of the whole planet.

The four guardians of Terra—Maliris, Tiamat, Kraken, and Lich—fight the party inside Memoria. Garland's voice, speaking only to Zidane, guides the party to their destination.

After the Second Battle of the Iifa Tree and entering Memoria, the party departs the Invincible, but they may return to it and leave Memoria at any time. The first area is the Stairs of Time. After wading through several planes of recollections with Garland's guidance, Zidane and his party are attacked by Maliris.

The heroes next venture into their own pasts, and witness Alexandria's annihilation. Zidane, Garnet, and Eiko are able to see it, but Quina cannot since they were the only member of the party not present in Alexandria for that event. After entering a Time Interval, they confront Tiamat, and continues on to several abandoned buildings and a waterfall, which brings them to an underwater memory of Gaia's earliest existence.

Progressing further along the ocean floor brings the party face-to-face with Kraken, who is summarily defeated. Zidane's party witnesses a swirling sphere of fire surrounded by emptiness: Gaia's birth. They climb into space and defeat the last of the chaos guardians, Lich. A glowing green portal warps them into a maze of stars, and Garland sends Zidane his final words before parting, asking them to protect the crystal. The party wanders through a seemingly endless labyrinth of starry void before emerging in the Crystal World, the beginning of all time.

Memoria is a linear dungeon. Each area has its own theme originating from the memories of the party and others. Many rooms have scenes, usually where Garland will explain circumstances to the party.

Memoria is entered from a portal above the Iifa Tree that appears after the events of Terra. The first time Memoria is entered a scene plays out, and the party fights the Nova Dragon. Afterward the player will enter the Outside area.

Your memories brought forth this place... Here, you shall witness the entire truth.

In his bid to defy me, Kuja tried to acquire Alexander... An incident, 10 years ago, started everything...

I feared Gaia's eidolons more than anything... However, I decided to deal with them before they became a major problem.

A tremendous force was summoned to Gaia during the age of war... However, the Gaians were not ready to harness so great a power... They were terrified and broke the jewel into four pieces... and they prayed never to see it again.

Life on Terra was coming to an end... We had no choice but to proceed with the fusion, which tragically destroyed Terra's native civilizations.

Terra reached the peak of its prosperity at this time. The people believed that their future was secure. Ultimately, that very hubris led to Terra's demise. Thus, I was created to deal with our plights.

Even if I were created to serve one purpose alone, I do not regret being born to this world.

Memoria is unique among final dungeons in that every random encounter will only contain a single enemy.

The secret boss, Hades, is fought in the underwater area; the player can initiate a battle by searching the hidden area on the sidelines. Hades is the Master Synthesist referred to in one of Mogster's early lectures and can synth two Pumice Pieces to create the Pumice that can be used to summon the eidolon Ark.

There are multiple Tetra Master locations in Memoria. In niches and corners, the action icon (! or ?) will appear and one must use the card button at such spot to talk to a phantom. They are advanced Tetra Master players who carry rare and strong cards, and they will also provide difficult card battles.

If the player reaches the room called Gate to Space, where the party fights Lich, with less than 12 hours of game time on the clock, they are able to receive Steiner's strongest weapon: the Excalibur II.

A message is left near the sword for Gilgamesh, written by Enkido, which says:

Upon Memoria becoming accessible, a sidequest becomes accessible where Zidane must repeatedly visit the Tantalus hideout in Lindblum's Theater District and talk to the various Nero family members. Starting with Benero and Zenero, a member of the Nero family will appear, saying the others are missing, then go and look for them. Each time Zidane returns to the hideout after a major event or battle in Memoria, a new member will be there, saying all the previous members are missing. This can be done repeatedly until Deathguise is defeated—the last major event that will trigger a new scene at the hideout.

After the scene with Penera, the final Nero family member, Zidane will comment on the huge family, and a treasure chest will appear inside the hideout with a Protect Ring inside.

Quina can eat Ash or Veteran to learn Doom, Behemoth to learn Angel's Snack, Chimera to learn Frost, and Stilva to learn Auto-Life.

The theme that plays in Memoria is called "Memoria" or "Place of Memory".

The theme of Crystal World, which is called "Crystal World", plays in the To The Origin area excluding the first visit. 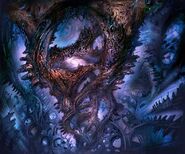 Concept artwork named "Last Dungeon" that houses "an enormous structure made out of petrified human beings". 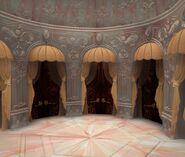 Memoria on the world map. 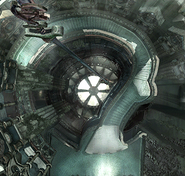 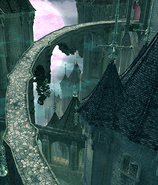 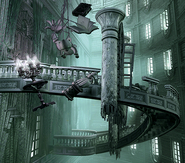 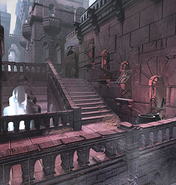 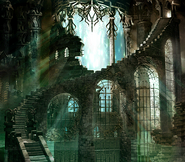 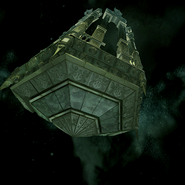 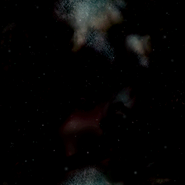 Battle background in the first Recollection.

Battle background in the Outer Path.

Battle background in the Gate to Space.

Battle background in the Stairs of Time.

Battle background in the second Recollection.

Battle background in the Lost Memory.

Battle background in the Entrance.

Battle background in the Ruins.

Battle background in the World Fusion.

Battle background in the Birth.

Battle background in the Portal.

Battle background in the Time Warp.

Battle background to the Origin.

Battle background in the Stairs.