Memento Mori is an enemy ability used by Vegnagun's torso. It inflicts major non-elemental damage to the party.

Memento Mori is a Blue Magic spell learned from Corses. It enhances magic attack for 30 seconds. It costs 4 Blue Magic Points to set. When set, it grants INT +1. It takes 3.5 seconds to cast and can be recast every 56 seconds. It can be paired with certain spells to create the Magic Attack Bonus trait.

Memento Mori is also an enemy ability used by the Corse family. 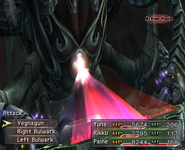 [view · edit · purge]Memento Mori is a genre of art that attempts to remind humanity of their own mortality. Memento Mori itself means "remember you will die" in Latin.