Melusine is a water-elemental Eidolon from Final Fantasy Dimensions II. Her signet, equitable by Jornee, can be obtained as a reward for completing the "Immortal Consequences" main quest in Chapter 3-2 of the Crystal of Time arc.

Melusine's signet provides Jornee with high HP and magic stats. The Tri-Magic abilities are useful spells that deal multi-hitting damage to a single enemy and deal heavy damage to enemies weak to the fire, water, or wind elements.

Should the player obtain the first Blue Gem II in Chapter 3-2, they can take advantage of Mesuline's unlockable passive to lower Jornee's MP cost by 21%. As the player progresses through the later portions of the "Crystal of Time" and "Eureka" arc, this trait is outclassed as more signets become obtainable.

Melusine is based on the boss of the same name from Final Fantasy V. Her appearance is based on her in-game sprites, presented as a scantily clad woman entangled with serpentine dragons. Her Element Master summon attack is a reference to her ability to change her elemental proficiency during her boss encounter in Final Fantasy V.

The following are the abilities Jornee can learn from Melusine:

In the original free-to-play versions of the game, Melusine was a water-elemental summon that could only be obtained through the game's summon draw shop. However, she taught the Tetra Mist ability instead of the Tri-Magic ability. In the premium versions of the game, Melusine's Tetra Mist ability was removed from the game and replaced with the Tri-Magic ability.

In the premium version, Melusine's artwork is altered by adding a bikini top piece to cover her exposed breasts; in addition, her loincloth was extended to cover her hip area. In the original Japanese free-to-play versions, Melusine's breasts and hips were exposed. 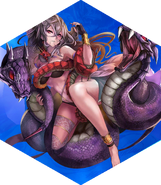 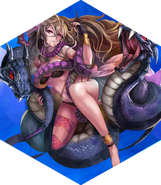 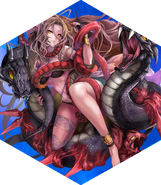 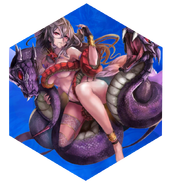 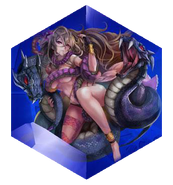 [view · edit · purge]In European mythology, Melusine is a female spirit that inhabits or watches over water. Similar to a siren or mermaid, Melusine generally possesses one or more serpent or fish tails and a woman's torso and head. Sometimes she also has wings. Several noble houses took great pride in claiming to be descended from Melusine, notably the Plantagenet Dynasty of England.