Magick that transforms the entire area of effect into the searing-hot flames of the lower hells.

Since its appearance in the Dissidia entries in the series, Meltdown has often appeared as a signature ability for Terra Branford in several spin-off titles.

Envelops all enemies and allies in ultra-hot flame.

Meltdown is an Attack spell (originally translated as Merton) with a Spell Power of 138 and costs 85 MP to cast. It deals unblockable, Defense-ignoring Fire/Wind dual-elemental damage to all targets on the screen, allies and opponents. It is learned naturally by Terra at level 86, or from Crusader at a x1 rate.

Meltdown has exceptional healing power for character who has a Flame Shield equipped.

Meltdown deals a small amount of non-elemental damage and may reduce the target's Vitality and Spirit to 0. When junctioned, its biggest effect is upon Vitality, being one of the best magic spells for this stat. Meltdown is one of the few spells that doesn't affect GF compatibility when cast in battle.

Kaustra is an Dark Magic for the Scholar while under the effects of the special job ability, Tabula Rasa. It is aligned with the Dark element and uses Dark Magic skill to calculate its accuracy and potency. It deals strong dark elemental magic damage with an extremely potent damage over time effect. The damage over time effect can only be removed by wearing off with time, the target's death, or being overwritten by Embrava.

Dissolve into a fiery world of chaos... Melt!

Meltdown (Melt in the PlayStation version) is a powerful Fire-elemental attack, which hits a large area. It is a Planar Magick spell used by Hashmal.

This section about an ability in Final Fantasy Tactics A2: Grimoire of the Rift is empty or needs to be expanded. You can help the Final Fantasy Wiki by expanding it.

Meltdown is a spell used by the Behemoth who will surround themselves with a purple aura and release a powerful blast that hits anything at a close range dealing moderate damage and burning status.

Deals fire damage to all allies and enemies.

Kaustra I-III are abilities exclusive to Jornee, serving as the final tier of her single hitting Fire-type spells. The abilities can only be learned from the Flame Mage eidolon. All versions of Kaustra deal heavy fire-elemental magic damage to all enemies and cost 70 MP to perform.

Meltdown is one of Terra's HP attacks that fires a fireball at the opponent. Depending on how long Terra charges the attack, the properties of the fireball change, allowing it to move at higher speeds, home in on enemies, and bounce off of obstacles at different levels of power. Terra learns Meltdown at Level 38. The attack costs 40 CP to equip and 300 AP to master.

Meltdown is one of Terra's HP attacks, with a strong homing even charged to its third form. Terra learns Meltdown a little earlier, at Level 35. The attack costs 30 CP to equip and 130 AP to master.

Meltdown (Chant) is a support ability for Terra. It grants Terra ATK Up I for 3 turns, SMAX BRV Up I for 5 turns and increases her BRV by x1.5. It upgrades the HP attack into Meltdown+ and has a high turn rate. Meltdown+ is a 1-hit fire-elemental magic HP attack.

Meltdown is a rank 6 Black Magic ability that deals four hits of fire, earth, or wind damage, depending on which element would deal the most damage, to one enemy. Each hit deals damage equal to 3.7 times the base magic damage. It can be created after completing the Meltdown Nightmare Dungeon and obtaining the Meltdown Record, as well as after obtaining Black Crystal x10, Fire Crystal x6, and Wind Crystal x6.

In Bravely Default II, Meltdown is a job level ability for the Arcanist asterisk. Referencing the spell's original appearance from Final Fantasy VI, the attack involves the user unleashing a powerful fire and wind-elemental magic attack to all enemies and allies on the field. 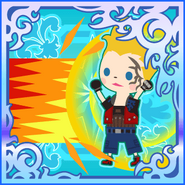 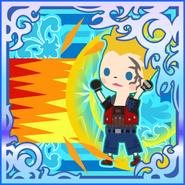 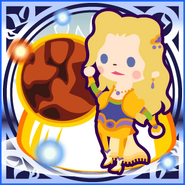 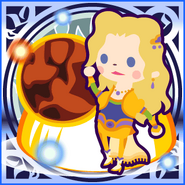 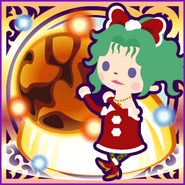 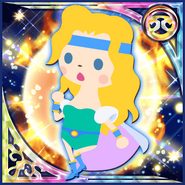 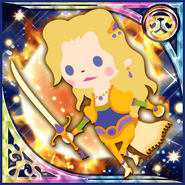 Enemy version in Final Fantasy Record Keeper.
Add a photo to this gallery

This gallery is incomplete and requires Final Fantasy Crystal Chronicles: The Crystal Bearers added. You can help the Final Fantasy Wiki by uploading images.

[view · edit · purge]Melting is a physical process that results in the phase transition of a substance from a solid to a liquid. Nuclear meltdown is an informal term for a severe nuclear reactor accident that results in core damage from overheating.

Magic
Retrieved from "https://finalfantasy.fandom.com/wiki/Meltdown_(Magic)?oldid=3475498"
Community content is available under CC-BY-SA unless otherwise noted.