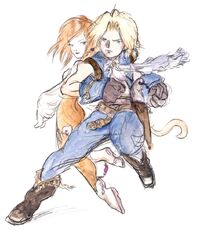 It's okay. Keep singing. 'Cause it's our song, right?

In-game, the theme is associated with the summoners' village of Madain Sari, and is the motif for Zidane Tribal and Garnet Til Alexandros XVII's romantic relationship. The theme could be seen as the theme of Gaia in juxtaposition to Terra's theme of "The Place to Call Home".

Without making any promises,
Without exchanging words, without making decisions
I embraced you and confirmed
Those days will never return

You wave your hand
In my memory.
Can you
Call out my name?

Replace your overflowing tears
With shining courage
Life goes on,
Beyond the night
Continuing on to a tomorrow
That is never in doubt

How many memories have I left
In the sky beyond the flying birds?
Forgetting fleeting hopes and dreams
In places unreachable

I can say it's by chance
That we meet again,
Even though the time for us to part
Will surely come

Even though we're destined to fade away,
As long as you are alive,
Life will go on
Forever,
As far as that strength goes
To its limit

Even if I die,
As long as you are alive
Life will go on
Forever,
As far as that strength goes
And continue to its limit

Alone for a while I've been searching through the dark,
For traces of the love you left inside my lonely heart,
To weave by picking up the pieces that remain,
Melodies of life - love's lost refrain

Our paths they did cross, though I cannot say just why
We met, we laughed, we held on fast, and then we said goodbye
And who'll hear the echoes of stories never told?
Let them ring out loud till they unfold

In my dearest memories,
I see you reaching out to me
Though you're gone,
I still believe that you can call out my name

A voice from the past, joining yours and mine
Adding up the layers of harmony
And so it goes, on and on
Melodies of life,
To the sky beyond the flying birds - forever and beyond

So far and away, see the bird as it flies by
Gliding through the shadows of the clouds up in the sky
I've laid my memories and dreams upon those wings
Leave them now and see what tomorrow brings

In your dearest memories,
Do you remember loving me?
Was it fate that
Brought us close and now leaves me behind?

A voice from the past, joining yours and mine
Adding up the layers of harmony
And so it goes, on and on
Melodies of life,
To the sky beyond the flying bird - forever and on

If I should leave this lonely world behind,
Your voice will still remember our melody
Now I know we'll carry on
Melodies of life,
Come circle round and grow deep in our hearts,
As long as we remember

"Melodies of Life" is one of the game's most prominent themes with several arrangements on the soundtrack. It plays during the final credit roll, and the track "Melodies of Life ~ FINAL FANTASY", the 22nd track of the original soundtracks's fourth disc, includes it.

Among the variations of "Melodies of Life" are the following themes:

The game's original soundtrack PLUS release has two unused variations of "Melodies of Life". The album's 34th track, "Main Theme", is a more lively variation of "Over the Hill", originally considered for use as the game's world map theme. "Melodies of Life (Silent Mix)" is the album's 42nd track: an arrangement by Tomoharu Hani featuring few instruments, a calm feeling throughout, and a piano solo in-between chorus repeats.

When the party stays at the Dali inn, Zidane hears mysterious singing, thinking it was Garnet's voice. During the party's stay at Lindblum Castle, he hears singing from the observatory post atop the castle and finds Garnet and asks her about the song. She does not remember where she learned it, having always known it. She explains she sings it when she feels sad or lonely.

When the party ventures to the Outer Continent, they meet Eiko Carol, the last survivor of the summoners' village of Madain Sari, who takes them to the village ruins. Zidane calls the song "our song" after he catches Garnet singing it in Madain Sari. They board a row boat and while floating below the village hear the song again, but this time it is not Garnet's singing. Zidane wonders who is singing it, and Garnet recalls the village's destruction by Invincible and passes out. The singer was Eiko, who also knows the tune. She reveals its origins in the summoners' village from where Garnet also hails from, unknown to her since the Alexandrian royal family adopted her when she in her childhood lost her memories during a violent sea voyage following the village's decimation.

After the party defeats Trance Kuja and Necron in Crystal World, they return to the base of the Iifa Tree, and Zidane remains behind to look for Kuja while the others depart. Garnet returns to Alexandria to reign but never hears back from Zidane. When Tantalus Theater Troupe returns to Alexandria to perform I Want To Be Your Canary, during the play's climax, the actor playing Marcus casts aside his cloak to reveal his identity as Zidane. Garnet rushes to the stage to reunite with him and asks how he survived. Zidane explains he wanted to come home to her and sang their song.

"Over the Hill" appears in the music player as the first track of Memories of FFIX (Disc 1) - OST album purchased from Coernix Station - Cauthess for 100 gil.

"Over the Hill -arrange- (from FINAL FANTASY IX)" is available on the Memories of DISSIDIA FF album purchased from Old Lestallum for 500 gil.

"Over the Hill -arrange- from FINAL FANTASY IX"

An arrangement of "Over the Hill" by Mitsuto Suzuki titled "Over the Hill -arrange- from FINAL FANTASY IX" is featured as the background theme of the Destiny Odyssey IX storyline stage boards.

"Over the Hill -arrange- from FINAL FANTASY IX" is the ninth track of Dissidia Final Fantasy Original Soundtrack second disc.

"Over the Hill" returns as a playable Field Music Sequence. It is available to the player by default.

"Fragment of Memory" is an arrangement of "Over the Hill" by Yuzo Takahashi and is the 16th track on the original soundtrack.

This album features a piano arrangement of "Melodies of Life" by Shirō Hamaguchi as its 14th track.

This album features a classical guitar arrangement of "Melodies of Life" by Yuji Sekiguchi as its 19th track.

An 8-bit arrangement of "Over the Hill" by ajiponn is this album's second track.

"Cafe SQ: FINAL FANTASY IX "Over the Hill" / yuxuki waga" is a song on this arrangement album with music arranged to the theme of music that plays in cafes.

"Melodies of Life" is the 12th song on this piano arrangement album.

"Melodies of Life" is a popular song at orchestral Final Fantasy concerts and is often played with the theme from the same game, "A Place to Call Home".

This concert recording includes "The Place I'll Return to Someday ~ Melodies of Life", arranged by Nobuo Uematsu and Shiro Hamaguchi, and performed live by Emiko Shiratori and the Tokyo Philharmonic Orchestra. It was the 13th song of the line-up.

This live recording of an orchestral concert includes "A Place to Call Home ~ Melodies of Life", performed by The World Festival Symphony Orchestra conducted by Arnie Roth at the Universal Amphitheatre in Los Angeles, California, on May 16th, 2005. It was the 11th song of the line-up.

"Melodies of Life" is featured in this orchestral concert recording—named "A Place to Call Home - Melodies of Life"—and is sung by American singer Susan Calloway. It was the fourth song of the line-up.

This compilation includes the original Japanese version of "Melodies of Life" as its 16th and final track.

"Melodies of Life"'s original version was released as the 12th track of this collection of themes present in the Dear Friends -Music from Final Fantasy- concert tour.

The piano arrangement of "Melodies of Life" by Shiro Hamaguchi from the Piano Collections release of Final Fantasy IX is included on this album as its 12th track.

A rearranged version of "Melodies of Life" appears as the third track on this album.

A cover version of "Melodies of Life" appears as the Japanese bonus track of the 11th album by the Italian symphonic metal band Ancient Bards. 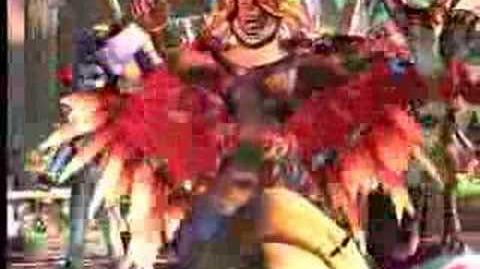 Final Fantasy IX was heavily marketed before and after its release. Starting on March 6, 2000[2], months before its July 7 release date, Final Fantasy IX characters were used in a Japanese Coca-Cola commercial produced by Squaresoft (now Square Enix), made in similar style as the game's in-game FMVs where Zidane and his friends chase a Coca-Cola bottle cap through Alexandria. The melody from "Melodies of Life" plays in the beginning of the commercial, and the music for it is included on the Final Fantasy IX: Original Soundtrack.