Southwest of the main archipelago

Melmond is a town from the original Final Fantasy. Located in the southwest of the archipelago in which the game takes place, it is the town most affected by the rotting of the earth.

The cause of the rotting of the earth is originally attributed to the Vampire from the Cavern of Earth, but no signs of improvement are shown upon its defeat. The decay only stops when the Warriors of Light find and destroy Lich, the Fiend of Earth. Later, the warriors return to Melmond to find Dr. Unne, so that he can decipher the Rosetta Stone to learn the Lufenian language. Despite having defeated Lich, the town's appearance never changes during the game.

The background music that plays in Melmond is Final Fantasy's "Town Theme".

One of the original servers in Final Fantasy XIV was named Melmond. It was merged into the Aegis server along with the Figaro servers.

The ruins of Melmond can be found in the overworld of Dissidia 012, in the Melmond Fens area. In the Confessions of the Creator Scenario, a Teleport Stone is located there. Two gateways nearby bear the names "North Melmond Gateway" and "West Melmond Gateway". 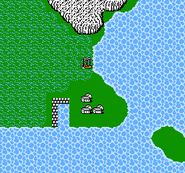 Melmond on the World Map (NES). 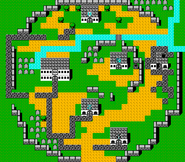 Melmond on the World Map (PS).

Melmond on the World Map (GBA).

Melmond on the World Map (PSP).

Melmond on the World Map (3DS).

The ruins of Melmond in World B in Dissidia 012 Final Fantasy.
Add a photo to this gallery