A mysterious gentleman rumored to be able to bend lightning to his will. According to him, he is on "temporary assignment." His full name is Meloch Mercurius, but everyone he knows prefers Mel to biting their tongue.

In the Maxima version of World of Final Fantasy, Mel can be found at the Coliseum where the player can challenge him in battle and have a chance to imprism him.

Age: Immeasurable
(Due to his alternate interpretation of time)

Navigator of Another World
A Mirage that served a Keeper called "Player" on another world. Like Tama and Serafie, he has a long history with Enna Kros. However, due to his somewhat complicated relationship with the supreme being of the A-World, he does not appear in the forefront as much as the aforementioned two. It is said there are several other Mirages in similar circumstances.

True Form
Like Tama and Serafie, Mel possesses a transfigured form, but it is said he also possesses a Jiant form that exists in several different phases. These are said to be his "true" forms, but they are still unconfirmed and shrouded in mystery.

Once the player imprisms Mel, he remains in the player's party and is one of the few unique imprismable Mirages (the other being Gilgamesh) to carry over in a New Game+ file. Therefore, a Mel Prism does not appear in the player's Prism inventory unless the player dismisses Mel from their Prism Case (at which point, should the player reacquire Mel, his level reverts back to 1 and his Mirage Board is reset). 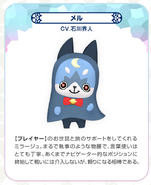