Laura Post
Meia (pronounced /MAY-uh/) is a player character in Mobius Final Fantasy. She is a witch who can summon otherworldly creatures. Meia is the main source of enemies for multiplayer mode.

Meia is a young woman with long, black hair who wears a white bustier covered by a revealing and stylized blue cloak. Her left arm is fashioned with armor and a pauldron, while her right arm is distinguished by a pinwheel bracelet. She wears greaves. She uses a bladed battle fan as a weapon.

During her appearance in the Battle Tower, she is cloaked in a blue robe that conceals her appearance. As a player character, her attire can be changed with her job assignment. Unlike Wol and the Ultimate Hero guest members, Meia can wear accessory pieces that, at present, act solely as adornments.

As an adversary, Meia is cold and calculating in her approach to dealing with Wol, ever in search of means to torture him. She prefers the element of surprise to direct confrontation, letting her conjuring do the dirty work before Wol has a chance to react. Wol sees this as cowardice on her part, though nothing could be further from the truth.

She begins as a player with her masterwork turned against her in Chapter VI, an unknown consciousness controlling them and mocking her as she presses through her quest. Though still Wol's rival, she is motivated by the loss of a man who sought to fight Chaos and perished.

Meia and a previous Warrior of Light candidate had fallen in love. Aware that this went against the prophecy she tried to distance herself from the warrior, but he was adamant and convinced Sarah to acknowledge his love for Meia, thus breaking the prophecy.

This raised Vox's ire who implanted suspicions of heresy against the Warrior of Light and Meia in other Blanks, leading to the two being hunted down. Getting cornered at the same bridge Chaos was killed at in the past, the two were killed, fell from the bridge and floated into the stream. Meia would have been content to simply float away forever together, but something brought her back from death, and she awoke on the same shores as the Blanks, having become a new Meia who was now branded a heretic—the Azure Witch.

Due to her status as heretic like Garland, Vox ordered the Blanks to slay Meia. Vox deduced her heretic status by associating her sea breeze scent with being a minion of Chaos, as the sea is Chaos's domain. Meia could now see Echoes, a skill only available to outsiders like Wol who do not hail from Palamecia.

Meia meets Wol as he ascends the Battle Tower to find Voyd's murderer. While under attack from Omega, the Blank confronts the blue witch about her role in Voyd's death, with Meia admitting she had no choice but to eliminate him as an act of self-defense. Citing Voyd as representative of Palamecian rule, she considered him a threat to her plans. Meia summons monsters to hinder Wol but he defeats them. Wol chooses not to slay Meia.

After her defeat, Meia grows stronger thanks to Wol's efforts. She places a curse on him so that he may never forget her, telling him her name. She works with Echo to summon beasts and creatures for Wol to conquer.

When pursued by the summoned beasts of Palamecia, Meia fights her way through but becomes exhausted and is about to give up when Wol comes in with Echo and saves her. A memory of the time she was saved by a previous "Warrior of Light" candidate conjures an illusion of him, called Swordsman, that serves as their enemy as they navigate through the realm. The use of his appearance is intentional: to torment Meia by making her recall her painful past.

After being forced to relive her past, Meia and Wol arrive at the place where the illusion awaits. Meia comes to peace with her past thanks to Wol's encouragement and the two defeat the illusion. Wol thinks about just obeying the prophecy, but the two agree that the fallen warrior was right, and that anyone with the light of hope in their hearts can be the Warrior of Light, even the fallen Meia. Hopeful, she decides to follow him on his journey.

In a post-credits scene, Meia is being transported to another world while encased in crystal alongside Wol and Sarah.

Primeval Witch
Add a photo to this gallery

Mellow Mermaid
Add a photo to this gallery

Y'shtola Rhul
Add a photo to this gallery

A heretic known as the Azure Witch. Meia uses her innate beauty and mystical powers to manipulate the Blanks, as she plots her revenge against the world of Palamecia.

Meia is a playable character who could be initially recruited during the Collector's Event A Heretic Waits as a First Time Rewad for completing the event's Desert Runic Temple (Hard) stage. 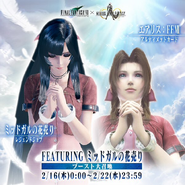 Meia as a Fauvist.