The Megalixir (ラストエリクサー, Rasuto Erikusā?, lit. Last Elixir) is a recurring item in the Final Fantasy series. It usually completely restores the HP and MP of all allies, and may also restore status effects. It is often very rare.

The Megalixir appears in the Dawn of Souls and 20th Anniversary versions.

The Megalixir first appears in the Advance release.

Megalixirs restore all HP and MP to the party and can be found as a possible reward in the second Lunarian Challenge Dungeon, or otherwise as a very rare drop from Sahagin Princes and Great Malboros.

Betting a Megalixir in the Coliseum makes the player fight Siegfried.

There are an unusually large number of Megalixirs to be found, with at least a dozen available for player use. In the PlayStation version, the player can find a chest containing a Last Elixir within Gaea's Cliff. This is a translation oversight, as the treasure is actually a Megalixir. The mistake was fixed in the PC version.

Megalixir's effect can also be used through Rikku's Mix Overdrive. Twenty can be used to customize Double AP to a weapon.

Megalixirs cannot be bought from shops but can be sold for 5,000 gil.

Megalixir+ is a result from Lady Luck's Item Reels by rolling to three Red 7s. It recovers up to 9999 HP and up to 999 MP to ally party; any KOs are revived. A regular Megalixir is achieved by lining three blue flasks.

The Megalixir will fully restore the user's HP and MP (but not party members). It is only available as a temporary item during certain events such as Besieged.

The Megalixir is a very rare item that requires rare loot to make at the bazaar. The only other places they can be obtained are as a reward from the Gilgamesh and Belito Hunts and as a rare treasure chest item. There is a reappearing chest on the Cerobi Steppe that has a decent chance of giving the party a Megalixir, even without the use of the Diamond Armlet. In the deep end of the Henne Mines, the player may also find Megalixirs in the areas before Zodiark.

To make in the bazaar, the player would need to sell High Arcana x2, Rat Tail x3 and Onion x3. It costs 108,000 gil and the pack can be created repeatedly.

The ultimate energy drink that takes on supreme restorative properties by way of Noctis's powers. Restores maximum HP and MP for the whole party.

Megalixir restores 100% of current HP, 100% of lowered maximum HP, and 100% of current MP, and removes Stasis and Danger for the party. It is found in various outposts, dungeons, and mazes, in Gladiolus's Survival skill Level 9-10, obtained as a reward for Mountains of Misfortune (Dave) [x5], a common Hunt reward, and dropped by Ganymede [dungeon, hunt] (1%), Phalaris [dungeon] (3%), and Behemoth King (3%).

Megalixirs restore 100% HP and MP to the entire party. They are obtained as special bounties for harvesting phantoma, and as rewards for fulfilling tasks: SPP Scavenger, Sanative Supplier III (x5), SPP Scavenger IV (x3), and Monster Pursuit VI (x3). They sell for 2000 gil.

A strange concoction even more mysterious than an elixir. In ancient times, it is said its miraculous restorative powers even made it an object of worship.

When used in compounding:

Megalixir is a trade accessory that grants +4 Luck when equipped, and can only be found in the Moogle Shop. It is required for higher-quality accessories.

ALL: Fully restores HP/AP and removes all status ailments.

Megalixir (also called MegaElixir) is a consumable item which fully restores the HP and MP of every party member. 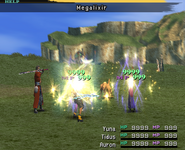 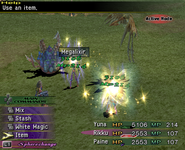 [view · edit · purge]An elixir is a clear, sweet-flavored liquid used for medicinal purposes, to be taken orally and intended to cure one's ills.