Mega Phoenixes can also be refined to make Phoenix Pinions.

Mega Phoenix revives all KO'd party members, fully restoring their HP. It can also be customized to armor to grant the Auto-Phoenix ability. Mega Phoenixes can be found at Djose Temple, won at second place in a Blitzball league, and 99 are awarded by unlocking Pteryx. They can also be stolen from Dark Ifrit, dropped from Extractor, Mech Defender, Mech Hunter, YAT-97, and YAT-99, and Bribe bribed from Alcyone and Ghost.

A valuable rare item, the Mega Phoenix will become available for free from the Alchemist dressphere via the Stash skillset. Mega Phoenix can also be used through the Mix ability.

With perfect timing, the user can revive herself with a Mega Phoenix.

A consecrated talisman that takes on miraculous properties by way of Noctis's powers. Brings all fallen party members back to full life with full HP and increases HP and MP recovery rate.

Mega Phoenixes are rare, being one of the few items Gladiolus can't pick up with his Survival skill. They can be found in multiple treasure locations in the wild, and once found the location will permanently be marked on the map. The player can return in a couple of days, as treasures respawn. They are also obtained from the Witch of the Woods quest [x5], appear as a common Hunt reward, and from Justice Monsters Five minigame.

Mega Phoenixes fully restore the HP of all party members, reviving anyone from Down. Also grants everyone the Phoenix's Favor status, boosting HP and MP recovery rate. 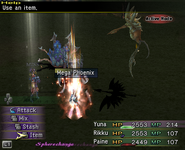