Mega-Graviton is an enemy Overdrive used by the Left Arm when on the Fahrenheit, Dark Anima on Mt. Gagazet, and being the Overdrive for Dark Cindy, Dark Mindy, and Dark Sandy when fought seperately on the Mushroom Rock Road. When used, it reduces HP by 43.75% of max HP to the entire party, while causing several status ailments.

Mega Graviton is used by Anima during its encounter in

The Tower of Babil. It deals moderate unaspected damage to all party members and spawns four Mega-gravitons in each corner of the room. The Mega-gravitons will each tether to a single player and cast Aetherial Pull on them, pulling the target towards them. If the target makes contact with the Mega-graviton it will then cast Graviton Spark on them.

Mega-Graviton was an enemy ability used by the Mobius Final Fantasy event version of Anima.

Mega-Graviton was enemy ability used by Anima, dealing raid-wide damage to all characters. 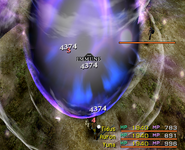 [view · edit · purge]In physics, the graviton is a hypothetical elementary particle that mediates the force of gravitation in the framework of quantum field theory.