Sandy Fox
Meeth Crym is a Lilty from Final Fantasy Crystal Chronicles: Ring of Fates who is the alchemy teacher for the twins Chelinka and Yuri. She lives in the same village and is a close friend to the twins' family, having known the twins ever since they were born. Because of her short stature and her method of speech, she is commonly mistaken as a child, although she is much, much older. She is a playable character in the game.

Meeth is a strong-willed and outspoken individual. She is quick to point out the foolishness of others and scold them for it, with her longtime friend Alhanalem being the most frequent target. She often backs up her admonishments with her ladle. Her temper is short and she fills several volumes with her "grudgies" against the monsters of Rela Cyel. She is quick to make threats and start fights. She often chides Yuri for treating her like a "kiddie", but can't resist being patted on the head by him.

Despite her belligerent personality, Meeth cares and feels deeply for the people important to her. She dearly loves Yuri and Chelinka and would do anything to protect them; her determination to see them again helps her to survive her years in the ruins. She is still haunted by the memory of Princess Tilika and the fall of Rela Cyel. Being reminded of either quickly moves her to tears.

Before the story began, Meeth was Aleria's handmaiden, as well as Princess Tilika's tutor, and lived at the court in Rebena Te Ra, along with Alhanalem. Both Meeth and Alhanalem held important positions at the facility in Rela Cyel and helped to oversee the evacuation of its engineers and scholars when it suffered a meltdown. She was forced to flee even though Tilika had gone missing. Later, Aleria and Latov reported that Tilika had given her life to try and stop Cu Chaspel from misusing her powers. Meeth was devastated by Tilika's death, and left Rebena Te Ra with Latov, Aleria, and Alhanalem afterward to settle in the Villa.

During this time, Latov and Aleria married and bore two children, Chelinka and Yuri. Meeth assisted in the birth, chastising Latov and Alhanalem for their panic—in particular, bopping Alhanalem over the head. Not long after that, the Villa was invaded by temple soldiers led by Cu Chaspel, and Aleria agreed to leave with him in exchange for not harming the twins.

After Aleria's departure, Meeth and Alhanalem helped Latov to raise the twins. They lived peacefully for a time, until the temple returned to abduct the twins. They killed Latov, imprisoned Alhanalem in red crystal, and rolled Meeth down the mountain in her own pot. She landed in the ruins of Rela Cyel and managed to survive there for several years, creating a cozy space for herself, but the monsters in the ruins—-particularly the One Horned Fish-—kept her from escaping.

Meeth is in a bad mental state when Yuri, Chelinka, Alhanalem, and Gnash find her several years later, but snaps out of it when she realizes she isn't alone anymore. She strikes a quick friendship with Gnash and with her extensive knowledge of the ruins, she helps them navigate to the exit.

During their escape, torrential rain causes the ceiling to collapse, and Yuri uses his power to save the party from being crushed. The ghost of Tilika appears and gives her cloak to restore him. Meeth recognize the garment and begins crying. She and Alhanalem tell the twins had happened that day as well as Aleria's true fate. Meeth explains that Latov and Aleria had kept this a secret because they were afraid the twins would grow up with vengeance in their hearts if they knew the truth. She also tells them that both Latov and Aleria would be proud of how Yuri and Chelinka had grown up with pure hearts.

Back in Rebena Te Ra, Meeth intimidates the false Alhanalem and causes a ruckus that awakes King Kolka from his rest. He recognizes both Meeth and Alhanalem and defies "Alhanalem" to speak with them privately. In Kolka's chambers, they discuss the fall of Rela Cyel and the corruption of the Temple. Before they can resolve on any action, however, Cu Chaspel invades the room and stabs Kolka, then calls down the guards before escaping. The guards take the party for attempted assassins and exile them to Sinner's Isle. After making their way to the summit, the volcano erupts and sends them plummeting into the Realm of the Dead.

Meeth uses a ladle in battle. Initially, she is best used as a support character, but at high levels she can deal a great deal of damage. Her focus attack is to get inside her pot and crash into enemies. She can later learn to stand on top of her pot if the button is held down longer, like a log-roller, for more damage.

Meeth's log-roller ability can also be used to pass through certain obstacles in the game, such as low walls and ramps. Certain floor panels also grant special abilities to Meeth's pot, for example Floating, Gliding, and also protection from stage mists which deal damage. 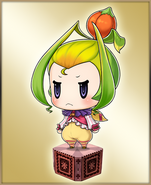 Meeth in the opening movie.