The Medusa is an enemy from the original Final Fantasy. Its physical attacks are nothing to worry about, though it can inflict Petrify with its Gaze attack. It is recommended to bring lots of Gold Needles when traversing the areas that they appear in, and to defeat all of them as quickly as possible, as they tend to appear in groups.

In the original Japanese Famicom version, the Medusa's sprite was topless. This was changed during localization. 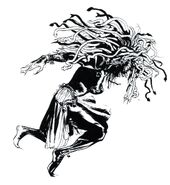 Gaze in the Origins version.

[view · edit · purge]In Greek mythology Medusa was a monster, a Gorgon, generally described as having the face of a hideous human female with living venomous snakes in place of hair. Gazing directly upon her would turn onlookers to stone.