Medusa is a water-elemental Eidolon from Final Fantasy Dimensions II. Two versions of Medusa are available as signets to equip, with both versions teaching Blizzard Blow to Morrow and Parai. Morrow's version is obtained as the first-time completion reward for the "Even Dust Piles Up" side quest and Parai's automatically comes equipped to him by default when he joins the party in Chapter 4-1.

Morrow's version of Medusa depicts a young woman lying on a massive shield with snakes emerging from her hair. As the signet is upgraded, the artworks begin to show serpents emerging around her shield, carrying a bouquet of flowers and a sword in each serpent's mouth

Parai's Medusa signet depicts a younger variant of Medusa wearing a Japanese garb with thigh stockings seated upon a massive serpent. As the signet evolves, her outfit changes color and becomes more elaborate, with a second serpent emerging around her.

Both versions of Medusa share the summon attack of Binding Gaze, which deals moderate water-elemental damage to all enemies and has a chance to inflict stop for a single turn.

The following are the abilities Morrow can learn from Medusa:

The following are the abilities Parai can learn from Medusa: 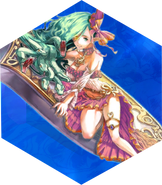 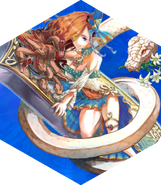 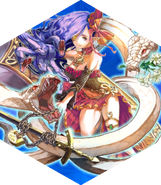 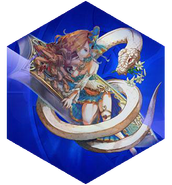 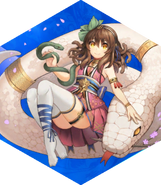 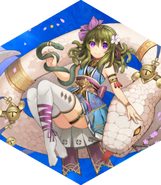 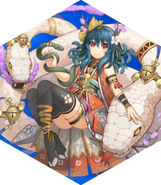 [view · edit · purge]In Greek mythology Medusa was a monster, a Gorgon, generally described as having the face of a hideous human female with living venomous snakes in place of hair. Gazing directly upon her would turn onlookers to stone.