A gunner who wielded state-of-the-art firearms he invented. Driven by the desire to create a weapon that could empower the weak against both swords and magic, Medius was both an accomplished researcher and marksman. However, as guns were ahead of his time, he was seen as a threat by those in power and forced to live as a fugitive.

Medius is a character and summonable unit from Final Fantasy Brave Exvius. A marksman hailing from Dirnado, his vision can be summoned by Rain and Lasswell to aid them in their battles.

Originally an inhabitant from the Dirnado continent,[1] from a time before the proliferation of firearms, Medius was an inventor and gunner ahead of his time. Driven by the desire to create a weapon that could empower the weak against both swords and magic, he invented various guns and was lauded as a hero among his people who he equipped against beasts and ruffians.

However, the Dirnado authorities saw Medius' firearms in the hands of their subjects as a threat. Medius was persecuted and hunted down, forced to live as a fugitive. While on the run, he became an expert gunman as a means of self-defense. He also took to promoting the use of firearms as a means for the underprivileged to stand up against the powerful elite.

Ultimately, Medius' life ended in a hail of bullets from his own creations. In his death, Medius left behind a crystal with his memories, to be summoned by those with the power of visions.

Medius' job is listed as Gunner. A 3-6★ Rare Summon, his battle is that of Physical Damage. Medius' Trust Master reward is the Growth Egg accessory, which grants the EXP x1.5 passive to the equipped unit. The ability increases the unit's experience gained in battle by 50%. He has no natural element or status resistances, and can generally equip only two types of weapons, guns and throwing weapons. Regarding armor, he can equip hats, clothes, light armor, along with accessories.

Medius can be awakened up to 6★ only in the Global version of the game. The awakening materials required are as follows:

Medius has three that abilities can be awakened: Hyper Fire, Gun Master and Auto-Limit.

Medius' stats at his highest levels are as follows (with no passive abilities taken into account), along with the maximum amount of stat points that can be increased through pot-enhancements: 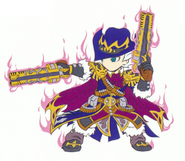