Grant Regen and Protect to user.

Mediguard is a Sentinel ability. While using Mediguard the damage reduction percentage increases by 20 while simultaneously recovering HP. Each stocked Mediguard command recovers an additional ca. 4% of max HP. AI-controlled Sentinels use Mediguard if their HP is around half full.

Mediguard can be learned by Snow (Crystarium stage 60), Vanille (stage 7), and Fang (stage 5).

Mediguard is a Sentinel ability that allows the user to gradually recover HP while defending. It has an ATB cost of 1.

Mediguard was made into a defensive ability, which can be assigned to any garb, provided it doesn't have four locked abilities. Mediguard requires a certain amount of ATB points to be activated (10 at Lv. 1) and prolonged use drains Lightning's ATB gauge at a rate of 10 ATB per second. It restores 1.8% HP per second and has 25% guard resistances. Since all abilities can be leveled up through their constant use, Mediguard can mitigate more physical and magic damage on higher levels while still healing its user.

Mediguard is a locked ability on Déjà Vu (Lv. 3) and Midgar's Flower Girl (Lv. ★). It drops from Flanitors and Gurangatches.

Mediguard+ is a locked ability on Miqo'te Dress (Lv. ★). It has a higher ATB cost (15) and restores less HP per second (1.2%), but has higher resistances (35%) and drains less ATB over time (7). The Esuna Guard auto-ability allows it to remove a status ailment every six seconds.

Fang also uses Mediguard as a guest, but gains nothing from doing it, as she cannot be KO'd anyway; she will still use it after taking too much damage.

Mediguard is Snow's Soul Break which expends one Soul gauge segment to bestow Protect and Regen on the user. 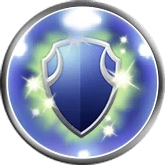