Cid Pollendina: Oh, shut up and help me remodel the Mecha Chocobo page!
Please expand this article into a full one. The following tasks need to be completed:This request can be discussed on the associated discussion page. Remove this notice upon completion.

Cogna. A chocobo made entirely of what appears to be machinery.
★SUI GENERIS: This unique soul belongs to the Mecha Chocobo from the main story.

Mecha Chocobo is a minor character in World of Final Fantasy.

Hyperion's Enslaver
With the powerful black chocobo Hyperion under its control, the Mecha Chocobo was plotting to create a new chocobo world order. Thankfully, Bartz and his friends were able to put a stop to its mecha machinations before they got off the ground.

Cognification
When the Mecha Chocobo saw the strength of Boko's mind, body, and spirit—honed as they were through years of travel with Bartz—it abducted Boko and attempted to transform him into a loyal Cogna. Luckily, Bartz and Chocolatte came to the rescue and thwarted the Mecha Chocobo's plans.

However, don't count this villain out for good. It will not rest until it has all of Grymoire in its feathery grasp.

Chocobo Interpreter
Cogna, robot, or otherwise, a chocobo can only "kweh." Thankfully, Chocolatte's chocochick partner was able to "translate" the Mecha Chocobo's very thoughts into human speech. Even Bartz, able to converse with Boko as he is, was bowled over by this unprecedented miracle of linguistics. 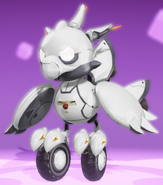 Mecha Chocobo as it appears in-game.
Add a photo to this gallery