Mech Guard is a machina enemy in Final Fantasy X encountered in the desert of Bikanel. It is not dangerous, with relatively low Strength and low Agility. As with all machina enemies, using the Steal command will instantly defeat it. If Provoked, it will use a less accurate physical attack, and will not attack whatsoever against Valefor. 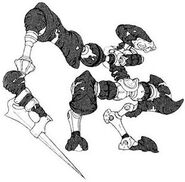 Retrieved from "https://finalfantasy.fandom.com/wiki/Mech_Guard?oldid=3363858"
Community content is available under CC-BY-SA unless otherwise noted.