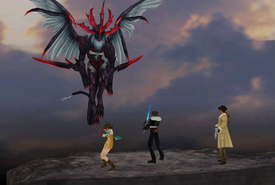 "Maybe I'm a Lion" by The Black Mages

The Black Mages performed "Maybe I'm a Lion" at this concert at the Gibson Amphitheater - Los Angeles, California, United States of America, in May 16th, 2005. It was the ninth song of the concert's line-up.

"Maybe I'm a Lion"'s original version was released as the ninth track of this collection of themes present in the Dear Friends -Music from Final Fantasy- concert tour.