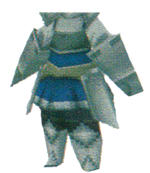 Armor that conquers hellfire, but falls to water.

The Maximillian (マクシミリアン, Makushimirian?) is a recurring piece of armor in the Final Fantasy series. It is usually rare and strong, and cannot be bought in shops, instead being obtainable through sidequests, exploring optional dungeons, or some other means.

The Maximillian appears in the 20th Anniversary edition and is one of the possible rewards for defeating a form of Chronodia. It gives the wearer +10 Stamina and +5 Strength, and has 55 Defense and 10 Weight.

Armor made by great blacksmiths.

The Maximillian is an armor for Cid. It provides +35 Defense, +12 Magic Defense, -10 Evasion, +8 Magic Evasion, and +10 Stamina, Intelligence, and Spirit. This armor is metallic. It appears in the Advance and The Complete Collection ports, and can be found in the Lunar Ruins.

Maximillian is a dummied out armor, only accessible via hacking. It would have provided 40 Defense, 12 Magic Defense, +10 to Spirit, Stamina, and Intelligence, +11% Magic Evasion, and -10% Evasion. It would have been used by Cid and Luca.

Top-grade armor for those of exceptional strength.

The Maximillian is the strongest in the GBA and 2013 ports. It provides +27 Defense, +5 Magic Defense, and +2 Stamina, and is found in the Sealed Temple or obtained by using the Control glitch on a Yellow Dragon if playing on the Japanese or American GBA version.

The Maximillian is Steiner's second best armor. It can be found by using a Dead Pepper on the bubble where the Shimmering Island used to be while riding Choco in the endgame. It teaches HP+20%, and provides +54 Defense and +3 Spirit.

In the original PlayStation 2 version, Maximillian is the second-strongest heavy armor. It requires the Heavy Armor 9 license. It can be found as a treasure in the Lhusu Mines (Site 6 South) and the Great Crystal, bought in the bazaar, or the secret shop in the Necrohol of Nabudis, made potentially available from the Hunt Club sidequest for defeating 30 trophy Rare Game, and drops from Elvoret.

In the Zodiac versions, Maximillian now provides 64 Defense, 1 Magick Resist, +9 Strength, +6 Speed, and requires the Heavy Armor 11 license for 90 LP. It can be found as a treasure in Lhusu Mines (Site 6 North) and Cerobi Steppe (Feddik River), drops from Elvoret (1% chance), is bought from the bazaar for 8,000 gil after selling Charger Barding x4, Split Armor x2, and Pisces Gem x3, and potentially from the Hunt Club sidequest. In the Trial Mode, it is a rare steal from Vishno in Stage 45 and Abelisk in Stage 85. It can be equipped by the Uhlan, Knight, Time Battlemage, Foebreaker, Archer, and Bushi.

The Maximillian is the best armor for Basch that provides +100 Defense, +50 Magick Defense, +15 Strength, and +10 Stamina. It is obtained by clearing the mission "Mission 74: Dance of the Dead" on the Paramina Rift. It is resistant to Fire but weak to Water.

Top-grade armor made with advanced techniques. The materials and design make it exceedingly strong.

The Maximillian is an armor found as a rare treasure on The Interstice in the Midlight's Deep with Treasure Hunter. It adds 200 HP.

This armor bears the crest of "The Last Knight."

The Maximillian is a rare, red armor that provides 3 to attack power, 46 to defense and 10 to resistance. It can be stolen or won as a reward. The Biskmatar Llednar Twem first appeared with one equipped, and the player may pilfer a set from the Brass Dragoons, the clan of Delia Dunes.

This armor bears the crest of the last of the Knights of the Round.

The Maximillian gives +44 Defense and +10 Resistance, and can be bought for 5600 gil in the shop after creating it in the Bazaar after using a Low Arcana, Dipreau Bronze, and Wyrm Carapace.

Maximillian is a weaker variant of the Paladin Armor. It can be purchased in the Liberte multiplayer shop for 1000 points. It provides 2 Defense, 2 Magic Defense, 1 Evade, 1 Magic Evade, 5% Strength, Intelligence, and Spirit.

Maximillian provides 30 Defense and 7 Magic Defense. It can be equipped by Jobless, Warrior, Dragoon, Memorist, Paladin, and Dark Knight jobs. It can be found in the World of Nil.

The Maximillian is one of the two strongest heavy armor and is a level 100 equipment piece that increases HP by 2,973 and physical defense by 20%. It can be obtained from the shop by trading with Dragon Mail, Blood-Darkened Bone x5, and 24,390 gil.

The Maximillian is one of the strongest heavy armor. It increases HP by 3300 and Bravery by 39 and reduces physical damage received by 10%. It can be obtained from the shop by trading 159,420 gil, Platinum Armor, Grand Armor and a Sinspawn. It still requires the character to be on level 100 to equip.

Named after the invincible hero that donned it in battle, this armor is lighter than most pieces of full armor found today. The many war exploits Maximilian has under his belt can be attributed not just to his ability, but also to the efforts of his anxious father wanting to protect the life of his son by making him armor. It would not be an exaggeration to say that the flexibility incorporated into the armor was crucial in his victories.

Maximillian is a Heavy Armor, obtained as Vaan's Trust Master. It provides 62 DEF.

Maximillian is an armor that can be equipped by Ibuki, Kamo, and Ryuma.

[view · edit · purge]The Maximilian is a real life type of armor made in the mid-16th century for German Emperor Maximilian I. It was designed to both deliver maximum protection for its users and be aesthetically pleasing to the eye.