Hmph! You're not even as attractive as I thought you'd be...

Matoya, upon regaining her vision

Matoya is a witch from the original Final Fantasy who lives in a cave. She is a gray-haired elderly woman wearing a red robe, orange scarf, and a red pointy hat. In the NES release she wears a purple hat. She cannot see without the use of a special Crystal Eye, which was stolen from her by the sorcerer Astos. The Warriors of Light recover her crystal eye by defeating the dark elf Astos, and for this she gives them a potion needed to wake the Prince of Elfheim. 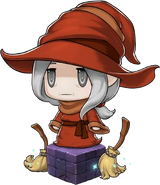 Matoya is a playable character who could be initially recruited during the Challenge Event Dawn of a Legend as a First Time Reward for completing the event's Sunken Shrine stage on Classic difficulty.

Matoya is one of the Warriors of Light in the Final Fantasy manga by Yuu Kaimeiji.

She is referred to as Witch within the episode, and she is clearly based on Matoya, along with her magic broom that can move on their own just like in the game. She is depicted as a generic witch, where Astos stole the Light Crystal (Crystal Eye) from her years ago. She is able to petrify people, and does so on Lana, and can reverse said petrification.

A quest involves finding three potions to restore Cid, who was turned into an oglop. However, the potions do not work and instead turn him into a frog. The description of these potions refers to the Book of Matoya.

One of the magically inclined katana used by Auron is named Matoya's Blade in the English release of the game, while its Japanese name is "Ecstacy".

A legend written in the bestiary mentions the name Matoya as the prophet in the legend of Ahnas the Holy.

While in the English translation of the game it is designed as "Malevolence", in the Spanish translation the Paradigm combination Ravager-Ravager-Synergist is named "Hermandad Matoya" (meaning "Matoya's Sisterhood").

To win a war, you must be willing to do whatever it takes. To fight, to kill, and if necessary, to die. The path you've chosen is paved with the dead. Walk it with your eyes open, or not at all.

Matoya to the remaining Scions of the Seventh Dawn

Matoya appears as a key character during the later parts of the Heavensward expansion's main scenario. She is a powerful Sharlayan sage, who was once the rival of Louisoix Leveilleur and former mentor to Y'shtola Rhul. She lives with frogs and enchanted brooms in her cave located in the Dravanian Hinterlands. An arranged version of "Matoya's Cave", called "The Mushroomery", plays in her place.

In Shadowbringers, Y'shtola Rhul takes the name of her mentor during her time in the First, being known as "Master Matoya" between the people of Rak'tika Greatwood, which was once the center of the Ronkan Empire.

According to the description of the Matoya's Cave Wonder, Matoya was a popular court thaumaturge for the Ronkans. When she created the Enthralled, however, she was accused of witchcraft and took up residence in the cave. In the 1998 English translation, the Enthralled was a demon and Matoya was described both as a "he" and as a "Sorceress".

Matoya makes a cameo as one of the tutors from the in-game manuals explaining the game's calendar.

Matoya is also the name of a Ghost Card the player can battle. The Matoya ghost is a Level 100 Warrior of Light that has the Purple Gem and Crystal Eye to be won through Battlegen, the latter is a reference to the item Matoya is missing in Final Fantasy. 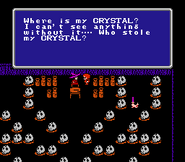 Matoya met in her cave (NES).