Mateus is the Rank III Water Flying Esper in Final Fantasy XII: Revenant Wings. Its normal attack, Flash-Freeze, deals damage to a line of enemies extending from it, and its special attack, Blizzaja, deals heavy damage in a small area.

The Judge of Wings summons Mateus into battle during Mission 6-4: Audience at the Auralith. After its defeat, Filo gains her Quickening, Wind Soul.

With its proficiency in Ice magick and its weakness being Thunder instead of Fire, Mateus is a fearful foe against Melee Fire Espers. Since Flash Freeze is an frontal in-line attack, Mateus's attack range is slightly further than most Melee units'. With Flash Freeze and Blizzaja it can effectively defeat any Fire Esper. Mateus can also be used to defeat Melee units and is highly recommended against Ifrit, which is a Rank III Melee Fire Esper. Mateus is like a trump card against him especially with his immunity to Slow.

Mateus primarily relies on Flash Freeze and Blizzaja, but if afflicted with Immobilize while Ranged enemy attackers pursue it, Mateus becomes weak. If afflicted with both Immobilize and Silence, Mateus becomes unreliable, defeated by enemy Ranged units, especially by the Black Mage leaders and even Tiamat. Golems' normal attack, Wild Charge, that inflicts Immobilize, and Raiden's Silent Storm, that inflicts Silence, can cripple Mateus. 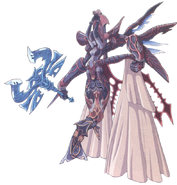 Artwork by Ryōma Itō.
Add a photo to this gallery
Retrieved from "https://finalfantasy.fandom.com/wiki/Mateus_(Revenant_Wings)?oldid=3219964"
Community content is available under CC-BY-SA unless otherwise noted.