Mateus is a boss in Final Fantasy XII found guarding the Sword of Kings within the Stilshrine of Miriam. He is the second Esper to be obtained in the storyline. He is also fought in the Zodiac versions' Trial Mode at Stage 16 along with five Ice Azers. In the Trial Mode battle, Ice Shield (common) and Icebrand (rare) can be stolen from him.

Scion of darkness ruling and protecting those who live in the underworld, in opposition to Lahabrea, Abyssal Celebrant and scion of light. In the course of his rule, he submitted to avarice, and the darkness took his heart, transforming him until he was both evil and corrupt. Then in his cowardice did he bind a Goddess of the Demesne of Ice, and using her as a living shield, he challenged the gods. Defeated before their might, he fell screaming into the depths of hell, there to be imprisoned for eternity.

The Original Japanese Guidebook cites Mateus's MP as being 2229, but subsequent guides list it as 999.

Stilshrine of Miriam (Hall of Worth)

Stilshrine of Miriam (Hall of Worth)

When the party finds Mateus at the heart of the Stilshrine of Miriam, numerous Ice Azers spawn around him. They are similar to Ice Elementals, but weaker. Mateus is protected by Reflect. His Blizzaja is difficult to counter and can inflict Sap.

Eliminating the Ice Azers before working on Mateus is a good way to start, although at level 30–33 they will only do about 10–30 damage, so it is not necessary to destroy them. Equipping the Dawn Shard on a character comes in handy, as it will yield a wall of 0 damage from the Azers. One should be wary of using area-of-effect magick to eliminate the Ice Azers, as Mateus has Reflect, and hitting him by accident could KO the caster.

Ice Shields and good weaponry (Lightning-elemental) will be useful. In the Zodiac versions, Tourmaline Rings halve Ice damage and protect against Sap, making them great in the battle against Mateus. Using magick against Mateus is ill-advised, as he is constantly protected by the Reflect; although it can be removed with Dispel, he will recast it.

Another effective strategy is to cast Reflect on the three party members and have them cast Thundara on themselves. Since Thundara is an area-of-effect spell, it will target all three party members and be reflected to hit Mateus and score nine hits on Mateus each time. With the party's levels being in the low 30s, about three rounds of this will be enough to finish the battle.

Another simple strategy is to chain Quickenings (if available). If the party is around level 25–30, this will do about 3000–4000 damage to Mateus.

Mateus is surrounded by Ice Azers, which either pelt the party with Blizzard or buff Mateus, even as he will throw up a Reflect to ward off offensive magic. He and his minions are weak against Lightning and the Azers can be put to sleep, so abilities like Sleep Buster and Thundaga Strike will be useful here. Should the Azers fall first, Mateus will pound the party with Blizzaja.

The party should deploy Shellga and focus on reducing the Ice Azers' numbers to one, putting the last Azer to sleep. With this done, the party will have at least a couple of turns to whack at Mateus before the Azer recovers. The player can put it to sleep again, then focus on Mateus and repeat as needed.

Mateus also appears as an endgame magicite boss. No Azers are present, but Mateus instead has defenses that are unusually extreme even for high-level magicite. He is immune to all elements but Fire, reduces all magical damage too severely to be viable, repeatedly buffs his high physical defense, repeatedly increases his Fire resistance, and periodically enrages to reduce incoming damage even more. The fight requires a very strong physical Fire team with multiple layers of element boosts and ways to counter his buffs. The enrage may only be dispelled by hitting him with a single attack that breaks the damage cap, requiring a physical Fire ability or Soul Break that is mechanically able, strong enough to actually do it through his boosted defenses, and can be used frequently.

Mateus's primary offense is not unusually strong, but includes repeatedly applying Sap to interfere with healers who rely on Regenga and Last Stand. He Reflects party members; if this is dispelled, in the final phase of the fight he will attempt to instantly kill them with Flash-Freezes that either automatically inflict 99999 damage, or heal himself if reflected (lowered by his own magical reduction but still quite potent). If the player takes too long to kill him, the party will run out of their strongest abilities and he will Flash-Freeze more often and widely, rapidly picking off the party and/or healing too quickly to overcome with weaker attacks.

As a magicite summon, Mateus will Flash-Freeze all enemies, lower their ice resistance, and continue to periodically Flash-Freeze individual targets. All of these hits may break the damage cap. 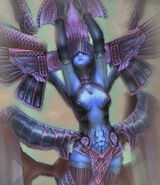 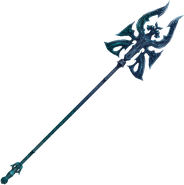 Mateus wakes up from his icy slumber to attack the party.

Mateus's glyph shatters at the end of battle. 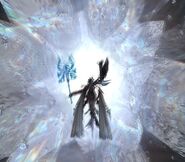 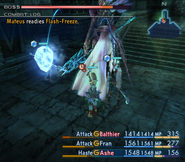