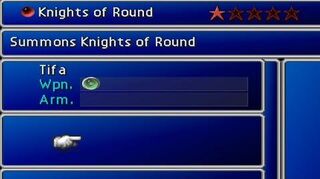 Materia smuggling is a glitch found in Final Fantasy VII that revolves around using garbage memory to 'store' Materia, which can then be transferred to the party.

There are three flavors to this glitch, two of which work on all versions except the original PlayStation version, and the third only works on updated (non-1998) PC ports.

On the Materia Exchange menu screen, the game will remember the cursor placement after exiting the menu. By placing the cursor on the final character, then losing a character for a story event, the cursor will be placed over an empty character slot. The game pulls from a garbage memory registry containing hexadecimal code which defaults to 00, meaning the empty character is believed to be equipped with the Buster Sword (two Materia slots) and a Bronze Bangle equipped with MP Plus Materia.

At different occasions during the game, the party lose a character(s) who disappears from the Exchange menu. The instances are:

If the player exits their save the Materia are deleted from that save file, and the empty slots will return to MP Plus Materia. In the PC rereleases the Materia persist upon exiting the save, but are lost if the application is closed.

Due to a bug in the coding, it is possible to use the glitch setup above to transfer Materia across save files. The player must initiate the glitch setup on a file, and get a Game Over. The player must load up a save with fewer characters than the one just used. The glitch will now be active on File 2, allowing one to place Materia into the garbage memory. However, the memory persists across saves. The player needs to place the desired Materia into slots one and two in the garbage memory, then get a Game Over. Finally, they must access a new save (with fewer characters than the cursor's position) and the glitch will be active again, having saved the Materia stored in the memory.

Since the game doesn't save progress upon Game Overs, it is possible to complete the process, remove the smuggled Materia from the active party, save, and then restart the cycle, to get multiple duplicated high-level Materia early in the game.

Bugs and glitches
Community content is available under CC-BY-SA unless otherwise noted.
Advertisement