Over the course of many years, Mako energy crystallizes into Materia...

The Materia Caves are special locations in Final Fantasy VII scattered across the world map only accessible by a special chocobo, with the exception of the Quadra Magic through the Quadra Magic cave glitch. Inside each cave is one special Materia not available anywhere else. The Materia have an appearance unique from the other Materia and emit great amounts of light.

The four Materia are:

The cave in Nibelheim where flashback Sephiroth explains the process of natural Materia formation is specifically referred to as a Materia Cave in the Debug Room. It bears an Elemental Materia.

Yuffie's search for a Materia that can cure geostigma is detailed in "Episode: Yuffie" and "Episode: Nanaki".

Yuffie Kisaragi and Yuri travel to the Wutai materia cave after the Lifestream summoned from the planet had changed the geography of the area making it accessible on foot. The cave does not get visited in the end, however the two visit a cave formed by the geological changes nearby suspecting the Lifestream may have moved the Materia to the cave.

Yuffie visits several materia caves, and Nanaki joins her in her visit to the final materia cave she knows about located in the snowfields. It is unknown if this refers to the Snowfield Cave from Final Fantasy VII where an All Materia is found, or another cave not visited in the game.

"Open Your Heart" plays in all Materia caves.

The Mime cave is accessible by a green chocobo. 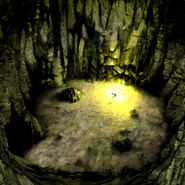 The Quadra Magic cave is accessible by a blue chocobo. 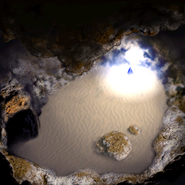 The HP<->MP cave is accessible by a black chocobo. 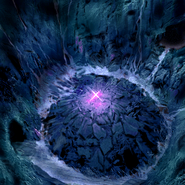 The Knights of Round is accessible by a gold chocobo. 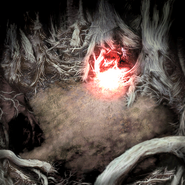 The Knights of the Round cave.