Materia crystals have been fused into the blade of this sword.

The Materia Blade (マテリアブレード, Materia Burēdo?) is a recurring weapon in the Final Fantasy series appearing in every Tactics game so far. The blade is a reference to Materia from Final Fantasy VII, though no such weapon ever appears in that title or its subsequent Compilation. The blade itself, while referencing Materia, may also represent Cloud Strife's Ultima Weapon.

A sword of extraplanar origin.

Cloud Strife must equip this weapon to use his Limit attacks. It can be found at the top of Bervenia Volcano by using a Chemist's Treasure Hunter ability. It also can be obtained via Melee and Rendezvous. It has 10 Attack and 10% Weapon Defense.

An early artwork shows Cloud with the Buster Sword ( 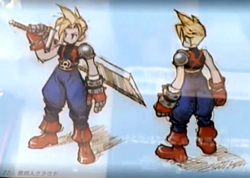 ), but this does not appear in the game, Cloud instead having Materia Blade as his main weapon.

Materia Blade is a rare blade-type weapon that teaches bangaa Gladiators Ultima Sword and Mog Knights Ultima Charge. It has an Attack of 27, which makes learning said abilities a hard task. It can be stolen off the Mog Knight in Mission #20: Present Day (however, it is a random steal and the Mog Knight's initial weapon must be stolen for the Materia Blade to appear) and as a reward for a "Town-Town-Forest-Forest" Treasure Hunt. The weapon also provides +15 Magic and +10 Resistance.

The Materia Blade is a rare blade that teaches Gladiators and Moogle Knights their ultimate abilities. The Materia Blade is the most powerful blade, providing +58 Attack, +15 Magick, and +10 Resistance. It can be bought for 12,000 gil in the shop after creating it in the Bazaar after using a Mythril, Hero's Tonic, and Demon Feather. It can also be obtained after winning the speed battle in Chita on Weaponsmiths masters. Chita gives the player a lecture then says, "thanks for hearing this old body out" and hands the Materia Blade. 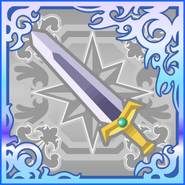 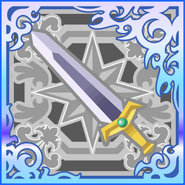