Materia has long blonde hair, which gradients into red, and golden eyes. She holds a strand of her hair in a clasp on her left side. Materia wears a long, white cage dress with a light blue bottom that gradients into a lime green with blue and gold gear-like designs. She has a small white hat with blue lining with gear attachments on top and white shoes with gear-like high heels. She has five blue-and-gold swords attached to the back of her dress. She wields a mechanical scepter with a cog in its center and a pointed shaft.

Her appearance seems to draw from the various incarnations of the summon Alexander, the living castle, which is typically associated with Holy-elemental attacks.

I had no other choice! I simply employed the only means available. Do not embellish your own importance; what I did, I did for the sake of the world.

Unlike her predecessor, Cosmos, of whose will she was born, Materia is blunt and assertive. Due to her attitude and lack of knowledge of World B, her champions question her motives. While she speaks in a sophisticated and polite manner, Materia is self-righteous and prideful, believing she has a rightful claim over World B and treating Spiritus with contempt in spite of their shared desire to protect the world. When Materia sees the Warrior of Light, Cecil, and Noctis at Spiritus's tower, she accuses him of turning her champions against her and of standing idly by while Shinryu destroys World B, even though Spiritus was also unaware of the threat. Although Materia is willing to work with Spiritus to defeat Shinryu out of dedication to save the world, she reaffirms her goal to vanquish him once World B has enough battle energy to sustain itself.

Materia embodies common story elements central to the Final Fantasy series: light, technology, science, and the "power of mankind." Dualism features heavily in the series, and Materia represents a heavenly angel, but her actions and behavior hearken to the idea of how the sacred and majestic do not always represent the side of good. Although she carries benevolent intentions, her shortsightedness and judgmental and accusatory nature show flaws that are in line with her ruling elements as a goddess, including the fallacy of how power and justification supposedly equals righteousness.

When World B collapsed, Cosmos, who stayed on the planet until its end, was erased from existence. Her will, along with the will of Chaos, survived and reincarnated as Materia and Spiritus, respectively.[1] Materia retains no memory of who she once was, only aware that she was a goddess of order and harmony.

Materia summons fifteen champions to fight each other to generate battle energy to sustain World B. Because many of these champions had participated in the endless wars that the world had once been a stage to, most were unwilling to fight. After Spiritus interrupts their meeting to declare that he rules World B, Materia demands that her champions stop Spiritus and dismisses them, refusing to listen to Noctis's request to be returned home.

Materia's champions doubt her intentions due to her apparent lack of knowledge of them and of World B, and many set out in search of answers of Materia's and Spiritus's origins. Later, Cloud brings Bartz to Materia, who had been made aware that one of her champions was missing during their first meeting. Cloud begins to tell Materia of something amiss in World B, to which she questions if Spiritus's champions are proving too much for her own. Bartz informs her that planesgorgers are sapping the world's energy, to which she asks why they do not excise the threat. Shantotto steps in and opens communications with Spiritus, who is with the Warrior of Light, Cecil, and Noctis, and Materia accuses Spiritus for attempting to turn them against her. After being informed of the situation, Materia and Spiritus form a temporary truce to stage a battle to lure out Shinryu, the true cause of the loss of energy on World B.

When enough battle energy is generated to lure out Shinryu, Materia joins Spiritus and all of their champions in an attack against the dragon. They are repelled as Shinryu reveals its true form and attacks them.

Once Shinryu is defeated, the gods restore the world and the champions are sent home after imbuing their memories in crystals to serve on the gods' behalf. Materia remarks that she swallowed her pride by fighting alongside Spiritus and affirms she will vanquish him once World B has enough energy to sustain itself. With Spiritus in agreement to begin a new war to ensure the world's survival, Materia summons crystal doppelgängers of the Warrior of Light, Noctis, and Lightning to fight Spiritus's doppelgängers of Garland, Sephiroth, and Ultimecia. 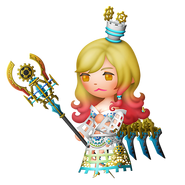 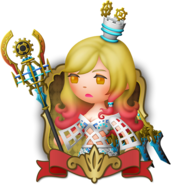 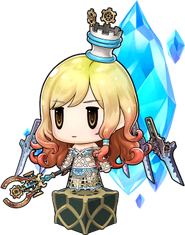 Materia is voiced by Erina Mano.[2]

She is voiced by Madison Davenport in the English version. 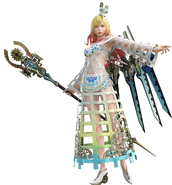 Materia on the logo.

It is possible that the goddess's name derives from Latin mater (mother). Though Materia shares her name with the magic orbs from the Final Fantasy VII world, it is clear in the Japanese and the pronunciation of the name in some English dialects that the first vowel sound is slightly different. In Japanese the first vowel sound is held for an extra mora, as indicated by the ー (chōonpu?) following マ (ma?). The Latin mater would be transliterated into Japanese as マーテル (māteru?).