Like the other Matanga peoples, the Arkasodara resemble the great marid both in appearance and brawn. They are indigenous to the isle of Thavnair, and founded the city-state of Radz-at-Han together with Au Ra and Hyur migrants. Their bulky frames belie their deftness of hand, and their thirst for knowledge has led many to pursue mastery of the alchemic arts.

The Matanga are quite large, with elephantine bodies and large trunks. They wear colorful outfits made of traditional fabrics. There are two distinct tribes: the Gajasura, who now live in the Azim Steppe, and the Arkasodara, who remain in their ancestral home of Thavnair. Those who remain in Thavnair live among both Hyur and Au Ra migrants, and in turn share their own cultural differences and their love of all knowledge.

Those of the Arkasodara live as tradesmen and carry an interest in all things academic. Many find work in Radz-at-Han and the Great Work of Thavnair as alchemists, studying various branches of work with discoveries that surpass even the alchemists of Ul'dah. The Gajasura, meanwhile, survive the Azim Steppe as nomads, living mostly within the mountains rather than the main steppe. All Gajasura have been met as enemies in combat, so little is known of their individual culture; however, they do hold a deep hatred of Au Ra, where they relentlessly hunt the Xaela of the Azim Steppe for sport.[1]

The Matanga's extraordinary ears can detect sounds below the range of other races' hearing. They communicate with spoken words combined with a pattern of foot stomps. Certain parts of their speech are too deep for other races to register. Most Gajasura are much, much larger than Arkasodara, with "short" Gajasura being about the same size as an average adult Arkasodara.

Wind-up Matanga. Another minion is available to purchase after completing a certain amount of Arkasodara Tribal Quests based on the Endwalker Arkasodara, the wind up arkasodara.

The Gajasura Matanga introduced in Final Fantasy XIV: Stormblood were originally never met outside of combat; various Matanga enemies can be encountered in the Azim Steppe, one being simply named Gajasura, sharing the namesake with their group of people. The Matanga are featured in the later instances of the 'Dataqi Chronicles' FATE chain. It was not until the Arkasodara Tribal Quests in Endwalker that non-hostile Gajasura were met by players.

Both tribes of Matanga originate from the tropical island of Thavnair. When Au Ra settlers arrived, they befriended the peaceful Arkasodara and both teamed up to force out the warlike Gajasura. Fleeing to the Azim Steppe, the Gajasura would nurse a hatred of Au Ra for centuries to come. When a clan of Hyurs from the mainland of Ilsabard came to try and take Thavnair for their own, the dragon Vrtra negotiated a ceasefire between them and the Au Ra and Arkasodara. The three races established the city of Radz-at-Han, and Vrtra has secretly served as the satrap through a royal family of Au Ra.

The Matanga of Thavnair worship the Magus Sisters, a trio whom most groups in Thavnair looked up to. Cinduruva, the eldest sister, is said to be bearer of wisdom; Sanduruva that of prosperity; and Minduruva, the youngest, ingenuity.

The Warrior of Light and their traveling party met many Arkasodara upon arring in Thavnair. The first they met was a young fisherman named Matsya, who introduced them to the culture of Thavnair and led them to the Great Work, where many alchemists had gathered to create a talisman capable of resisting the tempering from Fandaniel's towers. Nidhana was the lead researcher, and after testing the talisman's strength, she planned to create many more to assist the Radiant Host in saving the Matanga who were kidnapped inside. After Nidhana herself was kidnapped, the Warrior of Light entered the

The Tower of Zot to rescue the trapped Matanga.

After the destruction of the tower's core, all Matanga who were held captive inside were rescued and freed of their tempering to their deities.

When the Final Days came to Thavnair, many Matanga fell victim to the widespread fear and despair that plagued the populace, brought on by a manifestation of dynamis overwhelming their aether. Settlements such as

Vanaspati were destroyed in the apocalyptic events, leaving many Matanga dead or missing.

What's in a Parent and

Steppe Child quest chains. After then completing the joined quest

A Budding Adventure, players can then proceed to unlock the daily Arkasodara quests with hippos born to run.

Following their survival of the Final Days, those displaced by the fires tried to continue their isolated lives of hippo racing and rural delinquency, but were causing unintentional disruption on the roads between Yedilhmad and the Great Work. Trna, the leader of these Arkasodara, came up with the idea to establish a delivery service, along with the help of the Warrior of Light. They created the Hippo Riders out of the old trade post of Svarna, and began expanding their operations from drag racing hippos to shipping delivery services.

Upon seeing the poor diets and meal preparation of alchemists at the Great Work, Trna came up with the idea to include food delivery in the Hippo Riders' services, where they cook food on site at their post and deliver it to settlements in Thavnair alongside their orders from Yedilhmad's port. After realizing they had begun to overwork their hippos without ample time for rest, a stable and wading pool were built in Svarna, where both working hippos and rescued hippo calfs from Vanaspati could rest and relax.

A Gajasura by the name of Acala arrived in Thavnair determined to conquer a new home for him and his battle brothers - displaced Gajasura from the Azim Steppe where their small size and statures led to mistreatment and prejudice among their peers. Though Trna sympathized with their anger, and Arkasodara ally Ogul put aside her misconceptions of the Matanga to try and help, Acala kidnapped Trna's personal hippo and her cart as a conquest of spoils. Trna and Ogul began their plan of dealing with Acala peacefully, by opening an adventurer's guild in Svarna to encourage strong protection and people from different walks of life to work and live in harmony. 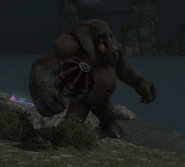 Gajasura, an A Rank in the Azim Steppe 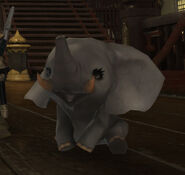 Trna with the Warrior of Light

The Hippo Riders, in Thavnair

A Roegadyn riding a hippo cart