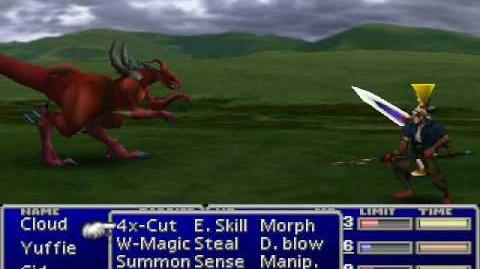 Limit, Magic, Summon, E.Skill, W-Magic, and W-Sum. are unaffected. This means that magic and summons can only benefit from Support Materia by linking them directly to the Magic or Summon Materia, or to Master Magic or Master Summon. Enemy Skills never benefit from support effects. Added Cut never takes effect after Mime even if paired with Master Command (if the mimed action had the added cut, it will be mimed, however).

Since this also affects the Item command, Added Cut paired with Master Command means the player will attack after using an item. If a revive or restorative item is used on a party member with this setup, the player will attack the character immediately after using an item on them. HP and MP Absorb also have the opposite effect if used with an Item command and a healing item; gaining HP loses 10% of the effect gained.