Master Coeurl is an enemy in Final Fantasy X found at the Omega Ruins.

To prevent it from casting magic, the player can inflict Silence, particularly with Wakka's Silence Attack, Silence Buster, or Triple Foul abilities. This renders Master Coeurl helpless in its succeeding turns.

Master Coeurl will provide 540 MP when Osmose is used on it, making it an excellent source of MP recovery. 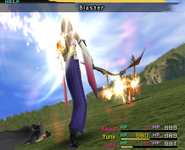 Blaster.
Add a photo to this gallery

Retrieved from "https://finalfantasy.fandom.com/wiki/Master_Coeurl_(Final_Fantasy_X)?oldid=3380950"
Community content is available under CC-BY-SA unless otherwise noted.