Cid Pollendina: Oh, shut up and help me remodel the Masked Woman page!
Please expand this article into a full one. The following tasks need to be completed:This request can be discussed on the associated discussion page. Remove this notice upon completion.

A shady character in a hood and mask who is always accompanied by a carbuncle. Is she helping the twins, or leading them astray? The truth is not nearly as simple as it seems.

The Masked Woman is a character from World of Final Fantasy. She serves as a mysterious guide for the twins, Lann and Reynn. She is always accompanied by her mirage companion, Carbuncle.

The Masked Woman dons a long, white dress paired with a purple corset, a white mantle, white gloves and white boots. She dons a white coif on her head and wears a stylized mask with piercing red eyes and a jewel embedded into the forehead.

Notes: Mysterious mask / Mysterious everything / Seems to be female? / Travels with a carbuncle

Ywain
The woman in the mask was an illusion created by a carbuncle whom Brandelis called "Ywain." In other words, the carbuncle was the one leading around the woman, not the other way around.

Ywain's skill lies in creating such illusions and impressing upon beholders' minds that they are real. By setting a lavish stage—a beautiful lie—he was able to convince Lann and Reynn to restore the Ultima Gate without reminding them of what had happened there before.

Ywain's Role
Ywain was tasked with using the cage's power to seize control of Hauyn's ability as a summoner and increase the number of Mirages in Grymoire—to bring order to the world through disorder. It seems likely he assumed Hauyn's form to use her powers more effectively; the mask and hood, however, reflect his own tastes.

Since filling Grymoire with Cogna and helping Brandelis achieve one of his primary goals, Ywain has had the run of Castle Exnine, smug with the knowledge his job was done and done well.

The Unlucky Carbuncle
Just as Brandelis transferred Pellinore and Segwarides into human vessels, he transferred a third Exnine Knight into the carbuncle that was accompanying Hauyn.

However, any carbuncle would have been a poor choice of vessel, and this one was weak; as a result, the knight could not be wholly reproduced, and was forced to retain the carbuncle's appearance.

What purpose? Well, the cyborgs' goal is to bring about the end of fully organic life. And both the humans and espers who make up the Exnine Knights have their reasons for hating Alexander and Enna Kros... You can piece the rest together.

The Masked Woman first appears alongside Pellinore and Carbuncle at the Dragon Scars, where they observe Lann and Reynn awakening Tifa's potential as a Medium. Pellinore speculates that it might be the Azure Prophecy at work, scoffing at the idea that the twins would actually fulfill it. The Masked Woman iterates that only an almighty king could fulfill the prophecy. In response, Pellinore mentions that they must swiftly work towards fulfilling the Crimson Prophecy, and the Masked Woman agrees.

The Masked Woman appears to Reynn and Lann atop the Crystal Tower, explaining to the duo that only Mirage Keepers can use the Ultima Gate that stands before them. She takes off her mask and coif, revealing herself to be Lann and Reynn's older sister, Hauyn. After convincing the twins that their mother is the person sealed inside the floating cage, she watches contentedly as the twins use their abilities to release the woman trapped in the cage. Released from her prison, their "mother" floats down to the ground. They find out Hauyn was actually in the cage, and can only watch as the Masked Woman fades into nothing.

Confused by the chain of events, Hauyn compounds the situation by stating that the twins have opened the Ultima Gate once more. The scenery shifts into a dark, tumultuous location as the twins realize they've been deceived. The Exnine Knights reveal themselves to have played a part in the deception, having used Hauyn's likeness to take advantage of the twins' motivation to find their mother and further their goals. 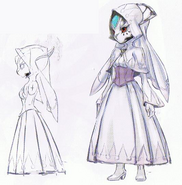