All (differs in stats and abilities for each)

The Mascot is a dressphere in Final Fantasy X-2, obtained aboard the Celsius in Chapter 5 when the player achieves Episode Complete in every location in Spira (provided that Zanarkand is not achieved last). In the International and HD Remaster versions, the dressphere can also be obtained by completing the Youth League Tournament in the Fiend Arena once. To unlock it, one needs to beat the Grand Cup: Hard six times.

As one of the few dresspheres in which each character has exclusive abilities, Mascot is arguably the best regular dressphere, requiring near-perfect story completion and providing high stats and useful abilities.

As the dressphere belongs to the Gullwings, it can be inferred that Yuna's moogle disguise during the opening mission in Luca was her version of the dressphere.

The characters take off their costume heads during their victory poses and spherechanges.

The dolls the Mascots wield are the only example of a returning weapon from Final Fantasy X that does not feature the ultimate weapon, as none of the girls wield Lulu's Onion Knight doll, although it does appear in a concept artwork.

In the International and HD Remaster versions, the dressphere is also obtained by completing the Youth League Tournament in the Fiend Arena once after beating the Grand Cup: Hard six times.

Mastering Mascot requires 1,559 Ability Points for Yuna, 1,599 AP for Rikku, and 1,399 AP for Paine. Each character has access to two out of six skillsets among the Warrior, Black Mage, White Mage, Dark Knight, Berserker, and Samurai dresspheres.

Mascot is the only dressphere that allows the use of other classes' abilities without accessories or Garment Grid gates.

Aw, I wanted to be a cactuar.

Now why don't I feel tough in this?

Laugh and I hurt you.

Stats differ among the characters for this dressphere.

Mascot increases Defense by 1 point and Magic Defense by 2 points per each level. Each girl has a different skillset. Its regular attack range is one tile ahead of the character. Multiple copies can be found on the ground inside the tower or bought in shops. 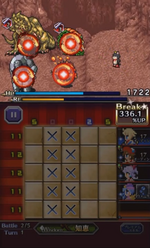 The Moogle Suit, Cait Sith Suit and Tonberry Suit are jobs for Wol, which respectively look like Yuna's, Rikku's and Paine's Mascot dresspheres. The costume head is aesthetic and can be toggled when customizing the deck.

Yuna as a Mascot.

Rikku as a Mascot.

Paine as a Mascot.

Paine as a Mascot without her costume head. 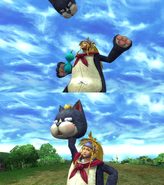 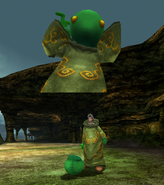