The Masamune (正宗, Masamune?) is Sephiroth's weapon in his various appearances in the Final Fantasy series. It is his version of the Masamune, a katana that has recurred since the original Final Fantasy.

The Masamune is designed as a Japanese odachi blade. The design and color of the tsuba (guard) and tsuka (hilt) have varied, alternating between blue and gold and entirely black. The blade's exact length varies, usually measuring at least as long as Sephiroth is tall or slightly longer, which would make it approximately six-to-eight feet long. The angle of the curve of the blade also varies, but it is never entirely straight. The handle is more than long enough to accommodate both hands, but Sephiroth can carry it in one thanks to his unbelievable strength.

The Japanese (odachi, 野太刀:のだち?), on which the appearance of the Masamune is based, is a large two-handed Japanese long-sword carried by foot soldiers as a weapon against cavalry soldiers. They were generally used on open battlefields as the weapon's length made their use indoors or close quarters difficult. During times of peace the sword was worn slung across the back as a symbol of status as it required considerably more strength and skill to wield than a conventional katana. Although odachi are designed to slash, Sephiroth's infamous method of killing his targets is impalement.

Said to be the only one capable of effectively using it, Sephiroth wields the Masamune as his personal weapon, but its origins are never stated. During the Nibelheim Incident Tifa Lockhart momentarily, and unsuccessfully, wields Sephiroth's Masamune against him.

While initially a physical blade, after his transference into the Lifestream Sephiroth can manifest the blade at will, as he leaves the sword impaled in his victims and still has it whenever he is encountered.

During the brief time Sephiroth is in the player's party, the Masamune has six Materia slots in three linked pairs, zero Materia growth, a 255 Hit rate, and 99 Attack power. It has a 100% critical hit rate. In his victory pose, Sephiroth swings the Masamune in front of him twice, flips it over in his hand, and slides it curve-up against his waist so the hilt rests at his side and the blade faces up at an angle behind him.

A replica of the Masamune can be acquired as an item in the Speed Square of the Gold Saucer, but it is a bonus item and cannot be equipped by any member in the party.

Sephiroth mentions he used the Masamune to kill Cloud's mother during one of his taunts. When Sephiroth shapeshifts Marco, a Sephiroth-clone, into himself, he uses the blade to destroy the bridge Avalanche was standing on, knocking them down. He uses the Masamune to repel Cloud's attack, sending him tumbling to the lower levels of the Shinra Building. Sephiroth uses Marco to wield the Masamune to kill President Shinra and stab Barret Wallace before transforming Marco into Jenova Dreamweaver.

He ultimately uses the Masamune to cut open an entrance to his abode and wields it as the final boss, performing powerful melee attacks and energy slashes, with him using it notably to attack and fling Cloud to another piece of building and to fire crescent slashes that flung him away. After Cloud refuses to join him, Sephiroth uses the Masamune to overpower and disarm Cloud of his sword in the subsequent sword duel.

Sephiroth manifests the Masamune into his hand upon his transformation from Kadaj. Wielding the blade against Cloud Strife and his new Fusion Swords, Sephiroth demonstrates the blade's power by slicing through several metal structures, pillars and concrete wreckage. Maintaining the upper hand throughout the battle, Sephiroth impales Cloud through his stomach (in a similar manner he impaled Cloud during the Nibelheim Incident) and then uses a version of Octaslash, leaving Cloud with severe stab wounds before flinging him back to the ground. Sephiroth is defeated when Cloud is reinvigorated by Zack's encouragement from the Lifestream, and uses his new Omnislash Version 5, destroying Sephiroth and reverting him to Kadaj, who dies.

The movie's revised version, Final Fantasy VII: Advent Children Complete, adds an auditory characteristic to the blade, which now hums in a similar manner to crystal when struck by wind. The scene where Sephiroth stabs Cloud in the shoulder during their fight is reedited to mimic Cloud's original impalement by the Masamune during the Nibelheim Incident.

Sephiroth, with the Masamune, has cameo appearances where he supports the forces of the Shinra Electric Power Company in their battle against the terrorist group Avalanche. 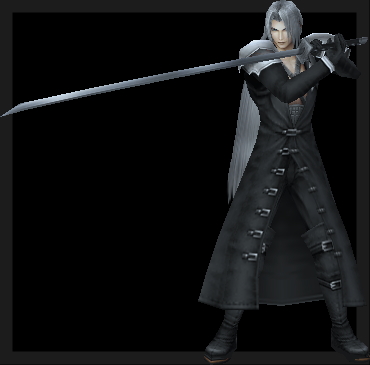 The Masamune appears in Sephiroth's hands whenever he fights, and in his boss appearances. It is not seen on Sephiroth's person during instances where he is not battling.

During a Virtual Reality System training, Sephiroth displays his extraordinary swordsmanship with the katana by easily repelling the assaults of his 1st Class SOLDIER friends, Angeal and Genesis, in spite of the pair attacking him at the same time. He demonstrates the blade's power by cleaving the Sister Ray's barrel into segments as he assails Genesis in the Virtual Reality System, and overwhelms him even with Genesis's Rapier powered by magic.

Sephiroth uses his Masamune to kill Ifrit in a single blow after saving Zack from its surprise attack. He also dispatches a group of Genesis Copies and monsters. He eventually wields the Masamune against Zack in his boss fight during the Nibelheim Incident, using it to perform his signature Octaslash and Draw Slash and to summon four large materia. After he defeats Zack and is stabbed by Cloud, Sephiroth blocks Cloud's attack using the Masamune and repels him back into Jenova's Chamber and impales and lifts him off the ground. Cloud uses the Masamune as a lever to hurl Sephiroth into the Lifestream below the reactor.

A Sephiroth clone is available to combat in Hojo's Laboratory, Experiment No. 124, which wields a copy of the Masamune.

In the anime OVA covering the Nibelheim Incident, Zack's Final Stand and the events in-between, Sephiroth massacres townspeople with the Masamune before making his way to the Nibel Reactor. Tifa's brief wielding of the blade after having watched her father die is also shown. Sephiroth uses the Masamune to defeat Zack wielding the Buster Sword, and disarms and impales Cloud after being injured by him. Cloud still has the Masamune impaled on him when Sephiroth falls to the Lifestream.

Masamune is Sephiroth's 35 CP weapon. It grants an extra use of Octaslash and an additional stack of Jenova when breaking target or hitting a broken target, increases BRV potency and the maximum stacks of Jenova by 1, and raises maximum Bravery and Attack based on number of Jenova stacks.

The Masamune is a 2-handed sword within the Forsaken Dungeon that provides 98 Weapon Atk, 8 Durability, +7 Magic Atk, -3 Speed, and -2 Consumption Rate. Only Masuda Koji can equip it. Sephiroth can wield the Masamune during Arcade Mode. 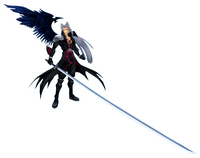 Sephiroth summons the Masamune as he acts as Cloud Strife's personified darkness. While frequently engaging Cloud in battle, Sephiroth also battles Sora first as a trial in the Colosseum and then on his own interest. In both encounters Sephiroth wields the Masamune in his off hand, following the trend of the principle Final Fantasy cast seeming to give Sora various handicaps in their battles.

The Masamune appeared as part of the Final Fantasy collaboration.

Man at Arms have created a real life version of the Masamune. Compared to the Buster Sword, the Masamune is supposedly easier to handle in real life.

[view · edit · purge]The Masamune is named after Masamune Okazaki, a legendary Japanese blacksmiths of the Kamakura Era employed under the Kamakura Shogunate. He was famous for his forging process of soshu kitae and nijuba, the strongest method for the body of katana, layering different consistencies of carbon steel for tensile composition and in such a way they were forged twice, and cultivating the aesthetics of katana through having refined and merged traits of quality with those of beauty.

His works were often compared to those of Muramasa, though always the better of the two. According to legend, the two swordsmiths set a sword of their making into a nearby stream as contest to see who made the better sword, with Masamune's blade said to have ignored all things that came near it. Though Muramasa belittled Masamune, a monk came to be the final judge and praised Masamune's swords for having benevolence. From this tale, Masamunes are said to be the marks of an internal peaceful and calm warrior, the opposite of Muramasas.

According to development notes by character designer and creator Tetsuya Nomura, Sephiroth's design was inspired by the legendary samurai swordsman Sasaki Kojiro. In turn, Cloud Strife is based on his more prodigious rival, Musashi Miyamoto. Sasaki is said to have wielded a notably long nodachi, allegedly created by Bizen Osafune Nagamitsu.

While a Masamune would seem historically inaccurate for a character based on Sasaki Kojiro, the traits of its appearance and identity as a weapon for Sephiroth tie into various influences of Japanese culture. Within Japanese martial arts fiction, it is a common archetype to portray stronger adversaries with seemingly greater attributes than the challenging protagonist. The perversion of something sacred to be used for evil has its roots in Buddhism and Japanese philosophy. Kojiro and Musashi have had a long tradition of being portrayed in premodern popular culture, including the earliest forms of manga and urban legends.

Within the art of Japanese sword-making, kenso is aesthetic appreciation revolving around the divination of surface patterns and physical attributes of finished swords to uncover the kind of spirit that a katana has when made. While many individual schools of katana-making have their own lexicon and defining attributes, there also exists a commonly shared ground of divination aesthetics. Masamune's attributes of kenso are said to be extremely powerful, and his swords gained the reputation of being sacred. One kenso trait of his swords is the folding fan shapes within its patterns, or ogiba. While the folding fan is considered an auspicious symbol of high class and great luck, it also relates to the invigoration of the spirit and closeness to the heavens, as the folding fan is said to be used as a divine receptor to channel the kami of Shinto faith into the being of a person during seances and kagura (dance to pacify deities) performances. The divination of kenso was also done to ensure a weapon matches its wielder, so the katana would share the same spirit as its owner. It could be argued that this explains Sephiroth's use of the weapon, significant of his perversion into madness and godhood, as this signifies that he may be "channeled" by Jenova, or the other way around.