The Marsh Cave is a location from the original Final Fantasy. Located southwest of Elfheim, it is full of monsters. It is a dark and maze-like cave with pillars of stone dividing levels into sections, and the Warriors of Light must often enter hollow rooms in the cave to get around these barriers. After the Warriors of Light obtain the Mystic Key, they can return to open the last sealed doors on the bottom floor.

The area is infamous for being a substantial step up in difficulty from anything the Warriors of Light have previously encountered, with packs of poisonous or paralytic enemies being the main threat. While the Final Fantasy Strategy Guide's famous advice of "bring 99 heal potions" is perhaps too much, adventuring parties who wander in unprepared and under-leveled are likely to find it a challenge.

The Warriors of Light come to Marsh Cave to retrieve the crown, and after defeating a group of Piscodemons (two to four) in the cave's deepest level, they find it. They then return it to its supposed owner, only to discover that he is Astos, and a battle ensues.

The Background Music that plays inside the Marsh Cave is called "Dungeon".

In the Confessions of the Creator Scenario, a Teleport Stone can be found in the area where the Marsh Cave is meant to be located, and has its name. Instead of the dungeon, the Land of the Stolen Crown Gateway is located in the now frozen marshlands, referring to the item the player retrieved from the cave in Final Fantasy.

The Land of the Stolen Crown gateway is a five-floor dungeon that serves as an approximation of the Distant Glory - Redemption of the Warrior storyline from the original Dissidia Final Fantasy, acting as a purgatory guarded by Gabranth, whom the player must defeat to escape. 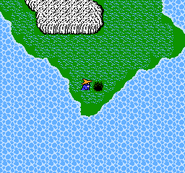 Artwork of a monster in the Marsh Cave from Nintendo Power.