Marshes (湿地, Shitchi?), also called Swamp, are a recurring type of terrain of the world map in the Final Fantasy series. Their location varies, but they are often inhabited by the Undead. They can always be traveled on foot.

Marshes can be found west of Elfheim, at the Marsh Cave region, make the entirety of Melmond peninsula and around the Citadel of Trials.

Huge marshlands can be found in the surroundings of Fynn, Altair and Mysidia.

Marshes can only be found in the vicinity of Amur and Saronia.

Marshes can only be found in Galuf's world, and are a very prominent terrain in that world. Notable marshlands are the ones in western Gloceana and around Bal.

There is one area of marshlands in the game, located in the Grasslands Area, by the Chocobo Farm. It is home to the Midgar Zolom, a species of gigantic snakes. A chocobo can be used to cross the marshes faster than the area's endemic snakes. The player does not engage in Random encounters in this area.

The player can enter a one-time field location after crossing the marsh where a Midgar Zolom slain by Sephiroth is seen.

Qu's Marshes are found throughout the world, there are four such marshes; one on the Mist Continent, one on the Outer Continent and two on the Forgotten Continent. They are home to the Qu species and are filled with frogs, a Qu delicacy.

The Pashhow Marshlands, in the Derfland reason, is an area of swampland in Final Fantasy XI. The player can also visit the marshlands in the Shadowreign Era.

The Nabreus Deadlands was once a prosperous region before being turned into a wasteland for eternity by the extreme Mist discharge by the Midlight Shard.

During the rainy weather, Ochu can be encountered here.

This area can be used for farming components.

In Clearwater Marsh (Rainy), the player can encounter Hedge Frogs, Mud Frogs, Swampmonks, and Caterchipillars, all of which drop Potent Essence, a Grade 4 biological monster component.

In Clearwater Marsh (Sunny), the Microchu spawns in mass numbers, allowing the player to collect many Potent Crystals, as well as the rare item component Sunpetal, making this the best location for farming Grade 5 biological monster components. It is also reasonably frequent during the rainy season, allowing the player to collect a number of Potent Crystals at the same time as collecting Potent Essences.

The Rootslake area in the South Shroud is a large marsh at the southern edge of the Black Shroud. A series of raised platforms and rope bridges enable to travelers to cross it safely, with an aetheryte at Camp Tranquil. The Fogfens in Mor Dhona has another notable swamp, being home to morbols.

There's a terrain tile called Marsh in Final Fantasy Tactics. A Geomancer standing on the Marsh terrain tile will use Quicksand to deal Water-elemental damage with a chance of inflicting Doom to any enemy units within five squares.

There is one marsh, and its located to the east of Kett, the Lizardmen's Nest is found within the marshes as well as Cave of Marsh.

The marshes on the world map in Final Fantasy VII.

The battle background for the marshes in Final Fantasy VII.

Qu's Marsh on the world map in Final Fantasy IX.

Battle background for the marshland in Final Fantasy IX.

Battle background for the marshland in Final Fantasy IX. 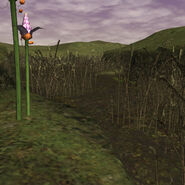 A marsh is a type of wetland that is dominated by herbaceous rather than woody plant species.