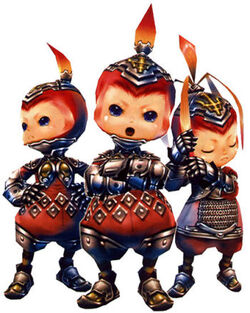 The Marr's Pass Caravan (マール峠のキャラバン, Māru-tōge no Kyaraban?), also known as the Leuts of Marr's Pass, is a caravan in Final Fantasy Crystal Chronicles comprised of three Lilties from Marr's Pass. They are often seen chasing monsters or exchanging a few words with the Tipa Caravan before heading off to their next exploit.

The first encounter with the Marr's Pass Caravan is after they run into the Black Knight. They rest on the side of the road, injured from the preceding battle, explaining that the knight fights wildly and viciously.

The Lilties will eventually meet with the group from Tipa shortly after a victorious escapade. They will explain they no longer need some of their items, giving the players a special weapon only obtainable in this scene.

Marr's Pass's Caravan also introduces the players to Gurdy. He is attempting to swindle the caravan by telling them elaborate stories. Rolf Wood becomes fed up, leaving him behind. This is the first instance of hearing a part of his poem.

Even though both groups are made of Lilties, the caravan from Marr's Pass does not get along with the caravan from Alfitaria. When the two caravans collide at a crossroads, all they can do is argue over the rules of the road.