detects by sound and magic
List of Marolith Enemies
Marolith is a genus of enemies in Final Fantasy XI. These strange animated rock monsters are a not uncommon menace to explorers probing the secrets of the Meeble Burrows, but have not yet been sighted elsewhere. Somewhat like Iron Giants, they have the unusual habit of lying dormant in a distributed state, appearing as mere scattered piles of rock. However, when adventurers draw near, they reassemble themselves and attack. 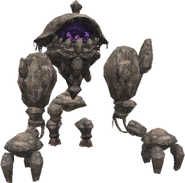