Hey, I'm not looking forward to my brother dying when this is all over. If only there was some way of doing it without anyone dying. 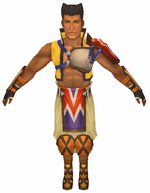 Maroda has black hair style in two distinct "peaks" above his temples. He has brown eyes and wears some protective gear, mainly on the left side of his body. He dresses in warm yellow and tan tones with some blue accents.

Maroda is dutiful and devoted to Spira's safety, be it protecting his brother in the latter's endeavor of completing his summoner's pilgrimage, or helping Yevon or, later, the Youth League, keep order in Spira. He has faith in Yuna, and though usually with Isaaru, is absent when his summoner brother temporarily turns against the "traitorous" Yuna, later lamenting the rumors of her crimes cannot be true.

Tidus and his party meet Maroda in Djose Temple where he and his brother Pacce are traveling with Isaaru on their pilgrimage. He next appears in the airship alongside Isaaru and Pacce during the escape from the Al Bhed Home in Bikanel. Following the events after seeing Grand Maester Mika the final time, Maroda and Pacce stand in front of the main entrance into Bevelle on the High Bridge, Maroda saying Bevelle is closed and that Yuna being a traitor can't be true.

Following the Eternal Calm, Maroda and his brothers appear to have gone their separate ways. He stays in touch with Pacce, who's become a sphere hunter, while he grows apart from his other brother, joining the Youth League while Isaaru aligns himself with New Yevon. Yuna, Rikku, and Paine meet him at the Den of Woe entrance where he warns them against investigating the cave. The Gullwings inquire after Isaaru even if they had already met him in Zanarkand. When Nooj, Baralai, and Gippal disappear into the Farplane, Maroda goes to Bevelle to assist with holding Spira together in the confusion.

Maroda can be recruited as a blitzball player in Final Fantasy X-2.

Maroda talking to Yuna via the CommSphere in Final Fantasy X-2.

Maroda in front of the New Yevon Headquarters in Final Fantasy X-2.