The game features four playable sports: basketball, volleyball, ice hockey, and dodgeball. Each sport plays similarly to their real-world counterparts, but with added special moves and a faster arcade-style pace. The game has two main modes: Exhibition and Tournament. Exhibition allows players to play one of the game's sports with customisable rules and a character/stage select option. In Tournament mode, players must win three games in a row to win the tournament and earn a trophy. There are three trophies per sport and finishing each one will unlock a hard mode version.

Competitive and cooperative multiplayer modes are included in the game. Players can play with or against each other locally at the game's sports and minigames. Online multiplayer was included at the game's launch, but is no longer available as the Wii's online functions are no longer supported by Nintendo.

On a regular day in the Mushroom Kingdom, Toad is working in the garden when suddenly a mysterious comet crashes down from the sky. Multiple Toads rush to the scene where they find four crystals. Each crystal contains an item related to a sport, giving the Toads an idea: they will organize tournaments for each of the sports and award the winners the corresponding crystal as a prize.

The tournaments are split up into three cups, ending in the Star Cup. In the final round of each Star Cup, the Star Ship appears and a team of Final Fantasy characters emerge to steal the trophy and escape to outer space on the ship. The player's team chases them down and defeats them at the tournament's sport, receiving their trophy and also the Sports Crystal as a prize. The player's team's lead character then uses the Sports Crystal to power the Star Ship and return home.

After finishing all four tournaments, the four Sports Crystals merge into a dark crystal, which teleports the team to a mysterious location where they encounter the Behemoth. After defeating the boss, the dark crystal transforms into a rainbow crystal. The player's team uses the crystal to return home.

The Sports Mix mode has an alternate final boss fight against the Behemoth King.

The game's story is centered around collecting four crystals. This is the plot of many Final Fantasy games.

The five Final Fantasy guest characters from Mario Hoops all return for Sports Mix, alongside the Slime monster from Dragon Quest. Each character can be unlocked by either completing specific cups multiple times or by clearing the Star Road multiple times.

The game features two Final Fantasy themed boss battles, against a Behemoth and a Behemoth King.

The Chocobo Theme is rearranged multiple times as a playable song in the Harmony Hustle minigame. 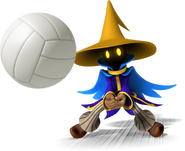 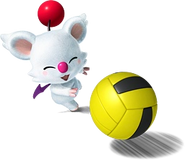 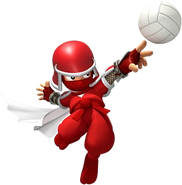 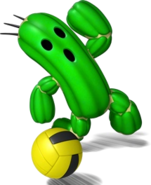