Marilith is a Rank V Mark in Final Fantasy XII. It is the ninth mark mentioned in the Clan Primer and becomes available after vanquishing the Wyvern Lord. Its name is a reference to Marilith, the Fire Fiend from the original Final Fantasy.

Marilith is found in the Invitation to Heresy area of the Zertinan Caverns, in the sunlit room (bottom right portion of map, where the shape of the room looks like the letter "C"), but the party must remain in the area for five minutes before it will show up.

It is also fought in the Zodiac versions' Trial Mode at Stage 34 along with three Bogeys. In this battle, the player can steal platinum equipment from it: Platinum Shield (common), Platinum Helm (uncommon) and Platinum Armor (rare).

Being a Creature of Legend, described as a holy spirit of Flame in Bestiaries of Yore, while more practical modern Observers have contented themselves describing it as 'extremely Violent, possessed of an insatiable Appetite for Flesh,' hunting it being Difficult in the Extreme. The viscous Secretion of its Scales is comprised of an Alcohol hot as Flame itself, and possessed of much Alimentation, being therefore prized above all else as an Ingredient in the Fermentation of fine Serpentwynes. The Proprietor of a Tavern known for exotic Potables posted a Bill for this Mark.

When the player enters the Zertinan Caverns via the south part of Dalmasca Westersand, they will be right by the area where Marilith resides in Invitation to Heresy. Marilith will jump out from the grass at the sunny spot to the west of the area. The player must have cleared the area of monsters. After five minutes, the player must go to the bottom of the upside down, F-shaped spot in the map, and Marilith will appear. It is not necessary to walk during the five minutes. In the Zodiac versions, the player may greatly decrease this wait by using the high-speed mode.

Marilith starts out with Protect, Shell and Haste. It attacks fast, but just with normal attacks and Tail Spear, which can inflict Slow and Sap. Marilith is immune to all elements except Fire, which it absorbs, and Water, which it takes increased damage from.

Even though the mark initially has Ignore Evade, it can be inflicted with Blind and blocking or parrying (with the Jade Collar) its attacks is possible. After having lost half of its HP, Marilith will enter a new battle phase and will no longer ignore shields.

Marilith will usually always attack the closest character, but if a ranged attacker uses an offensive item on it, the Marilith may change target and immediately use Tail Spear on them. Using magick doesn't make it change target. Marilith has an increased likelihood of combos towards the end.

The party should start out by casting Dispel on Marilith. Getting Haste back up after being afflicted with Slow is useful as not to lose time in an already fast fight. Because Marilith uses physical attacks, Protect is helpful.

The most effective debuffs to cast are Blind and Slow. The easiest way to inflict Marilith with statuses is with the Nihopalaoa + Remedy trick, but the Long Bolts for crossbows also inflict Slow on hit. Magick also always hits if the caster has the Indigo Pendant. Otherwise, magick casting benefits from either the Magick Gloves or the Serenity augment with full HP to enhance the reliability of their status effects. Once below 20% HP, Slow will have no effect and can be abandoned.

As Marilith will usually attack the closest character, the player can set one melee character as bait and equip the others with ranged weapons and water-based elements, magicks, and motes. Magick-casting characters should use the best staff available and either the Aqua spell or Aquara Motes (called Water spell or Water Mote in the original version). The Six-fluted Pole and Fumarole boost the potency of Water, and are thus useful for this battle. Decoy may still be worthwhile, as the Marilith can 1-2 shot most ranged characters if it switches targets.

Since Marilith ignores evasion while above half health, Quickenings can be used to quickly bring it below this threshold to take advantage of an evasion-stacked tank. After performing Quickenings, a melee character should keep Marilith attacking him/her while the other two attack from a distance and use Charge to restore their MP.

Once Marilith is below half health, the melee character is greatly recommended to equip the best Evasion-granting shield available and the Main Gauche, which provides 50 Evade (34 in the original version). In the original version, a blinded Marilith against a character wielding the Main Gauche, a 16-evasion shield with the Gauntlets accessory and all three Shield+ augments, will have about a 1/5 chance of being hit. In the Zodiac versions, the equivalent set-up (with a 15-evasion shield and the Jade Collar accessory) will have about a 1/8 chance of being hit. One may also consider equipping the Shielded Armor for a constant Protect buff.

While Quickenings may be used to bring Marilith below half health, they are also valuable when the mark is near death and enraged with HP-critical bonuses and rapid attacking speed. The Marilith's weakness is its low HP, which means it can be killed with a good enough Quickening chain when it begins to glow red.

The player will also receive a Serpentwyne Must after the battle, which is given to the Tavernmaster when the hunt is reported. If the player talks to Migelo after this hunt, they will find out he is the one who ordered the serpentwyne.

The Serpent Eye reward for the hunt is an ingredient needed to make a Serpentarius at the bazaar, which in turn is needed to make Tournesol, a top-tier greatsword. 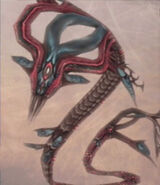 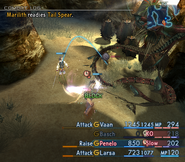