Marilith, the Chaos of Fire is an antagonist in Final Fantasy Dimensions II. She is one of the Four Chaoses sent to wreak havoc throughout the timeline.

Marilith is a multi-armed snake-like female creature that wields multiple swords. Her overall appearance is based Marilith's sprite design from the 16-bit versions of the original Final Fantasy.

As Marina, she has dark crimson red hair with a pink hair at the top. Her outfit consists of a pair of red glasses, a black tunic and pants, and a pair of crimson red shoes.

Sometime before the events of the Crystal of Time storyline of the game, Marilith arrived in Ajima under the disguise of a human woman named Marina. Disguised as a human, Marilith manipulated the people of Ajima with talks of peace and soon entered herself for the presidential election for the country. During this time, she manipulated a young ninja named Maina to leak information on Westa's latest military technology and information about the Flare Weapon being developed by Dr. Black for the CID corporation, telling Maina that it was to prevent Westa from harming Ajima.

During the events of Chapter 4-2, Morrow and the party learn that the Day of Reckonining has not been prevented due to the Flare Weapon still being created. Once they return to their time, Marilith frames an Ajima soldier named Ueji as a traitor leaking information to Westa and sends the military to chase after him.

After Ueji meets Biggs, the two set off to Ajima to clear Ueji's name. Marilith, realizing this, sets up a trap at the Agart Mines to kill both Biggs and Ueji and sends the Phantom Ship to unleash monsters to fight the party in order to distract them. Inside the mines Marilith, appearing as Marina, surrounds Biggs and Ueji with a group of Mind Flayers and intends on killing the two. However, due to the intervention of disguised Seiryu and Suzaku, Biggs and Wedge are saved from the monsters.

After Morrow and his party arrive to the depths of the Agart Mines, Marina reveals that she was tricking Maina all along with her talks of peace and used her to steal information on Westa's military weaponry for creating the Flare Weapon for Ajima to use. Abadoning her human form finally, Marilith reveals that she, Lich, and Kraken are of the Four Chaoses, creatures that were sent through time to wreak chaos through history. Marilith attacks the party, but she is defeated by Morrow and his companions. 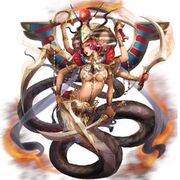 Marilith appears as a fire-elemental summon. She was previously obtained through the summon drawing shop. In the 2017 release of the game, her use has become exclusive to Maina. 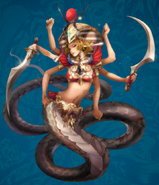 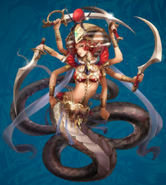 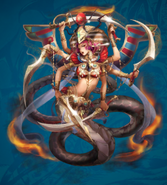 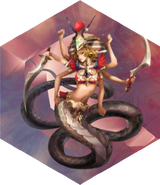 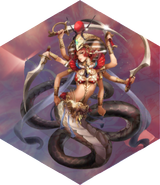 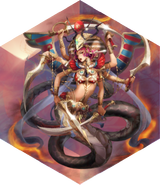