Marilith (マリリス, Maririsu?), also known as Marilis, Kary, Lilith, or Maliris, is a recurring creature in the Final Fantasy series. Always snake-like, female, Fire-elemental, and usually sword-wielding, Marilith first appeared as a prominent boss in the original game and has since returned as a boss in others. 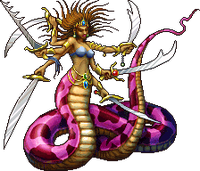 Marilith (originally called Kary) was one of the Four Fiends of Chaos. After the rampages of Tiamat and Kraken, Marilith made her abode in Mount Gulg, threatening the nearby town of Crescent Lake.

Marilith is the Fiend of Fire, and appears as a enemy fought in Mt. Gulg.

The Lesser Marilith is an enemy encountered in the Sealed Cave.

The "Fire Guardian" defends the Fire Shrine, and Maliris, a memory based on the Fire Guardian, created by Kuja, is later battled in Memoria. Crystallized versions of her appear in the Crystal World. She has a more serpentine appearance in this instance.

Marilith appears as a mark. It is entirely serpentine, and does not brandish swords.

A Marilith appears in the first episode. When Noctis Lucis Caelum was just eight years old[1], he was gravely injured from an attack of a ravaging Marilith and was knocked into a coma. His attendant died during the attack but his father, King Regis, saved him by driving the Marilith away.

Several years later, while Noctis and his friends are on their to meet Lunafreya Nox Fleuret, they encounter Niflheim soldiers. During the battle, enemy reinforcements—which include the Marilith—arrive. Noctis recognizes the monster and attacks, an act the Marilith reciprocates. Noctis, with the help of his companions, slays Marilith.

Marilis appears as a Lamia and is one of the four Falgabirds. She is an homage to Marilith.

The Kary is a boss found within the Cara Mountain Range. It can attack with a barrage of icicles, a charging attack, and a tail attack. It will drop the Ice when defeated.

Lilith is a possible monster that the party's monster unit(s) can transform into.

Lilith is a possible monster that the party's monster unit(s) can transform into.

Marilith is one of the main antagonists of the "Crystal of Time" arc. She is the Chaos of Fire sent to wreak havoc in the present timeline in order to cause the Day of Reckoning to occur. Her appearance is based on her design from the original Final Fantasy.

In addition, she appears as a Signet summon for Maina to use.

The Fiend of Fire, who uses the many limbs of her serpentine body to wield deadly weapons.

Marilith is a summon who uses Fire Arcana, evoking a timer upon the opponent. When it expires the opponent's Bravery becomes fixed for a certain period of time. A colored version of her original artwork from Final Fantasy is used. Marilith can be obtained as a Stage Bonus on the Shade Impulse II storyline.

A portrait of her also hangs in the Chaos Temple stage.

Marilith returns with the same function. She can be purchased from certain Moogle Shops for 100 KP. She also makes a cameo as a tutor in the in-game manual of the Labyrinth.

The Fiend of Fire herself gets mixed up when flailing all six of her sword arms.

Marilith appears as an enemy encountered inside the Interdimensional Rift. She uses Firaga and drops the Butterfly Sword.

Marilith appears as an esper and in a vision card. 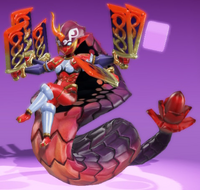 Marilith appears as one of the Superbosses in the Maxima-exclusive optional Hidden Dungeon as boss of the Fire route and in the dungeon's final battle with the other four fiends and Garland. 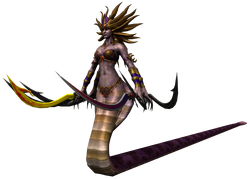 Marilith appears as an ability card and is also an enemy encountered in the fourth main scenario chapter. When fought she shares the element of fire with her original incarnation, but her obtainable card is of the darkness element.

Marilith appears as the Fiend of Fire once again in this alternate retelling of the original Final Fantasy. She acts as the boss of Mt. Gulg.

Marilith artwork from the Dawn of Souls release of Final Fantasy. 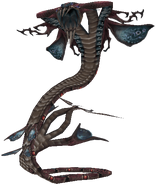 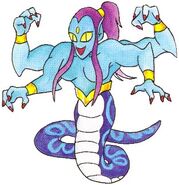