A skilled green mage from Mysidia. Although most of the mages of her homeland, including those who are prominent, are considered to be strange characters in their own right, Marie stands out among them due to her unusually boisterous and energetic personality. Rumor has it that the comrades she supports in battle even enjoy watching her taunt the enemy after she has enfeebled them with her magic.

Marie is a character and summonable vision from Final Fantasy Brave Exvius. A Green Mage from Magi Nation Mysidia, her vision can be summoned by Rain and Lasswell to aid them in their battles.

Marie is said to be a rather eccentric individual, being energetic and a strangely curious individual. She is very studious and intelligent and seeks to comprehend how much can the strength of Green Magic push the limits of a person. That is to say, how far can boosts take a person, but also how deep a victim of enfeeblement can fall. Her skill "Love You All" suggests she can be a kind person, nonetheless.

Marie's job is listed as Green Mage. A 5-6★ Rare Summon, her role in battle is Support. She has no natural element or status resistances, and her Trust Master reward is the Rainbow Robe – a robe that, besides boosting the equipped unit's stats, raises all elemental resistances by 30% with the exception of the dark element. To be awakened, Marie requires the following materials: Rainbow Bloom x20, Fairies' Writ x10, Calamity Writ x10, Prismatic Horn x5, Divine Crystal x5

Regarding equipment, Marie can equip the following types of weapons: staves, rods, and maces. As for armor, she can wear hats, clothes and robes. She also equip accessories.

Marie is widely considered to be the most powerful Green Mage-like character amongst Support units. Her abilities mostly focus on protective measures such as Elemental resistance, Status Ailment prevention, and Defensive Buffs. She can also provide major Elemental debuffs to enemies and mild assistance through status ailments. With Dualcast she is capable of easily using her Bar spells, Protectga/Shellga or even some curative spells of equipped to her (from Equipment, Materia or Espers). Her forte is on her skills Love You All and Lovely Guard. The former provides major protection against all elements, the latter prevents Status Ailments. When enhanced these abilities can provided extended protection, large heals and even additional defensive bonuses.

Marie has four ability slots, and Green Magic affinity Lvl 8 in both her rarities (5-6★).

Marie' stats at her highest levels are as follows (with no passive abilities taken into account), along with the maximum amount of stat points that can be increased through pot-enhancements: 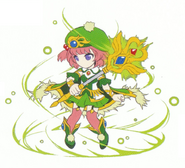